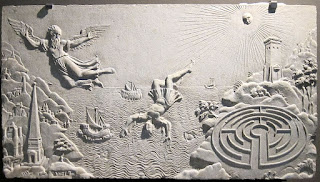 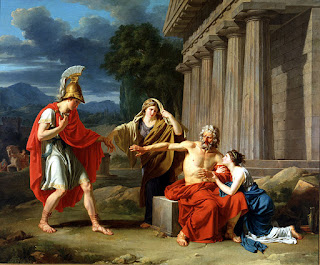 Recently, I've thought about Gods and Heroes and their involvement in our everyday lives for our benefit. While reading a Pagan book, I came across invocations on restraining anger, but it wasn't Hellenic. So I thought to myself, who would I pray to for restraining anger and helping with frustration in Hellenism? I think this is an important topic to discuss in such a series as Divinity in Daily Life because anger and frustration are among the most common afflictions among the average person these days, and I think my conclusion on the matter is quite interesting. Hopefully, it will help other Grecians and people who pray to the Greek Gods. I also think it's important for religious communities to talk about these issues together because we all face them. As Plato once said, be kind because everyone you meet is facing a hard battle.

Among the Heroes, the first I would think to pray to in this field would be Oedipus, for the simple experience He has in this matter, and the fact that He ended His life calmly. Oedipus experienced the tragedy of letting anger and frustration get to Him when He mistakenly killed His father in a fit of rage, not realizing the true identity of the man. I also didn't read anything about Him ending His life in anger, even though He had every reason to be mad at the world and His own misfortune in life. When He faced the Sphinx, her riddle at first must have also tested His mind, but He did not become frustrated. Instead, He maintained excellent fortitude, which is something you'd need to keep a calm mind in things that are very frustrating and angering. So one might recite a prayer such as this:

O' Oedipus of Thebes,
I humbly ask for clarity of the mind,
fortitude against frustration,
and restraint against anger,
that I may continue my road this day without horrid mistakes.

One might also consider Orpheus, a great Divine Musician who was able to calm any raging force with His wonderful lyre. Theseus would also be great to invoke for fortitude. Among the Gods, Athene and Apollo would be wonderfully fit. Athene is a strong, fighting Goddess when needed, but She also prefers peace and diplomacy to war, and tries to achieve that end beforehand. Apollo is the God of Enlightenment, and unchecked anger and frustration is not such a state of being. Therefore, Apollo's great mind can realign us with a prosperous outlook on life. The prayer above written to Oedipus is a structure that can be used for any of the Gods or Heroes mentioned here, just make the proper changes. Life's roads are not without hardships, and sometimes we can find it hard to barely function onward. But fortunately, we have the Gods, Heroes and each other.