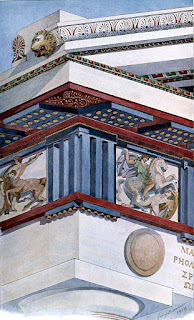 Many of us may not realize it, but modern history is mostly written by Christians, or historians who, in large number, tend to pander to the Christian idea of events, which as we know are all too common false or exaggerated. For example, for the longest time, the so called "Great Persecution" was regarded as a world event, whereas now, we have discovered that it was blown terribly out of proportion and propagandized by the Christian churches. Christians, by and large, were not targeted for their religion no more than anyone else, but rather because they routinely engaged in breaking laws and showed physical aggression toward the cultures where they resided.

However, the point of this post is an even greater falsehood that is often pushed, that which says that most Pagans and Polytheists willingly accepted Christianity. We have known for years that this is a lie, but we have recently discovered even more evidence to keep proving that it's a lie. What's interesting, however, is that the false history doesn't directly pander to Christianity. Rather, it tries to set up a false narrative about ancient Greek religion and faith that ends up being completely debunked by the stones in the dirt.

During my latest reading adventure, which I always love, I had the privilege of coming into contact with a magnificent work that I am enjoying very much, called The Complete Greek Temples by Tony Spawforth. In a nutshell, this amazing work details all forms of ancient Greek temples that have existed, and gives the wonderful architectural, religious, social and political histories behind them. I have not yet completed it, but at this point, I'd not only recommend it, but even place it in my temple's library. Indeed, the importance of temples to ancient Greek life and society cannot be overemphasized. Walter Burkert even calls the Greeks a "temple culture." The temple is as essential to Greek identity as the stars and stripes are to Americanism.

In the book, page 12 interestingly, the author talks about the fact that modern historians tend to fancy the idea that the ancient Greeks began to lose faith in the Greek Gods around the 4th Century BCE and onward. However, the large scale on which they continued to build their temples during this alleged time frame, tells a far different story. Some were, of course, smaller and bigger than others, and had a range of functions, but they always retained a religious significance among all else. In other words, people who are "losing faith in their Gods," don't continue to build temples to them. Archaeology and the hard evidence left behind continues to shatter these abundant falsehoods around the ancient Greeks, which has always been an attempt by modern society to delegitimize the ancient religions. The modern world, which by and large does not accept the Greek Gods as a real, legitimate religion, cannot possibly acknowledge the brilliance of the people in their culture. They don't want serious thought given to Polytheism, lest Monotheism lose control, and so they can't say in one breath what a genius Pythagoras, Hippocrates, Plato, Socrates, and Aristotle were and then admit that they believed in the Greek Gods. Therefore, they do everything they can to separate those people from their Gods, even at the expense of telling bold face lies to humanity.

The truth is clear and present. The ancient Greeks, by and large, did not willingly accept Christianity, Monotheism, or lose faith in their Gods. They were forced to give them up and accept Christianity at the hands of a government of massive state pressure, who had allowed itself to become corrupted by Christianity because of its ability to control people. The government fell in love with the very thing that destroys people and nations; greed. As a Hellenist, I think part of our duty is always to the truth, and we should never allow it to be concealed or hidden. We must always dedicate ourselves to that endless pursuit, upon which Apollon Himself sent Sokrates so long ago, that our minds remain free.