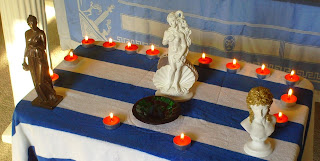 As the 4th Century CE rolled on, the rising Christian State, led by the power of Rome, was stopping at nothing to persecute the Polytheists out of existence. The old religion(s) under the Christian Emperor Theodosius I, had been outlawed, and in 393 CE, he finally banned even the Olympic Games of Greece. Of course, the persecution didn't begin with Theodosius and it wouldn't end with him either. But it would have appeared that the "massive state pressure" concerning the Christian State that Walter Burkert talks about in his book Greek Religion, was finally taking hold in its mission to force everyone into the new religion.

However, according to recent archaeological finds, it appears as if the worship of the Greek Gods, namely Aphrodite, set up a stronghold in Thessaloniki through the 4th Century, a region in the far north of the Greek mainland. By 306 CE, Christianity had already found its way into Thessaloniki, but there were apparently Greeks who refused it until the end. During the excavation of the metro, workers came across thousands of artifacts from the time period, most notably statues of Aphrodite, giving testament to the enduring worship of Her during this highly hostile, anti-Pagan time. Devotion to Her was as strong as the love and sexual desire itself over which She rules and gives to humanity. She was, without a doubt, one of the most hated Goddesses among the Christians, because She represented sexuality and freedom of the body. Christianity knew it could not gain control over the masses without shackling the basic human makeup. Aphrodite was a dire threat to the very core of their objective.

These finds are not only significant because of their history, but because it seems to show that, despite what the modern Church says, not everyone willingly accepted Christianity. Some people, probably most of the population, resisted it. There would have been absolutely no other reason for Christians to make laws forcing people to give it up. So today, we should also draw an inspired spirit as we look at the remains of undying devotion to the Gods, and carry it on into tomorrow and the days and years to come as we move to restore the traditional identities of humanity. No matter how hard, hopeless or hostile things get, let us never give up our beliefs, our love, our devotion.

To read more details about this recent story, check out the website of my friend and fellow Hellenist, Baring The Aegis.