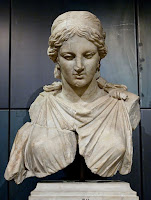 The Roman Christians feared no cult more than that of Artemis of Ephesus, it is said. Resting on the southwestern coast of Asia Minor in what is now modern Turkey, Her shining temple was one of the greatest wonders of the ancient world, taking over 100 years to complete, the Shrine of Artemis itself going all the way back to 800 BCE. The temple was twice as big as the Parthenon. Without a doubt, it was one of the hardest architectural projects that ancient Greeks ever faced. Nevertheless, they did it. In fact, Antipater of Sidon, an ancient Greek poet, declared that the temple was more beautiful than any other Wonder, whether built by Greeks or barbarians. He didn't even consider the pyramids to be of greater stature. The temple went through two periods of destruction, one by flooding and the other by an arsonist who sought publicity for himself. He was apprehended and executed for the offense. The temple was rebuilt each time, but in 401 CE, the temple met its final destruction at the hands of local Christian radicals. Today, all that remains of the once glorious house of the Goddess is a sad, singular, ruined column in the middle of a marshy vacant lot. It makes me want to cry when I look at it.

The depiction of Artemis at this temple was not your usual, however. We are used to seeing Her as a hunting Maiden, bow and arrows in hand as She sprints about the forests and wild areas of the Earth, usually accompanied by deer or Her hunting hounds. But at Ephesus, She was depicted as a Goddess highly adorned, Her robes decked with animal images, standing straight with Her feet together, hands out in a welcoming gesture, and Her upper body covered with an object that people still debate. Some say they are eggs or breasts, others even say they may represent testicles, although I highly doubt the latter. Why would a female fertility Goddess possess male fertility symbols? Whatever they are, these objects depict Her in the realm of fertility and nurturing. While some historians argue that this sets Her as an opposite of the Artemis of the Greek mainlands, I disagree. Artemis is the protector of children and wild creatures. Even though She's not a conceiving mother, She is still a caretaker. Both images, therefore, can make sense. But the cult of Artemis of Ephesus was not a universal one. Even though Ephesus was a Greek city, they considered this Artemis to be specifically the Artemis of Ephesus. They were not too kind to foreign influence.

The worship of Artemis here is significant because it extended beyond the mainland Greek world, even before Alexander conquered the East. Even though my own sanctuaries and shrines of Artemis have never depicted Artemis of Ephesus, I actually very much love Her temple of the ancient area. I would like to get statues of the Ephesus Goddess for my present Artemis shrine to go with the bronze center piece that I call the Huntress.

In recent times, the temple at Ephesus has fortunately been given another reconstruction. There exists today in the Turkish Park of Miniaturk, a replica of the temple, but it probably does not do the original justice, and is rumored to be under threat from radical Muslims in the region. I am not surprised that such is the case in Turkey. Even here in the United States, the Parthenon replica in Nashville received threats of destruction from a local pastor a year or so ago. Fortunately, he was dumb enough to record himself and was reported to the Parthenon administration. Greek temples, in some places, are still seeking to live freely and peacefully in the world. But as Hellenic Polytheists or Pagan servants of Artemis, we should also think about what Artemis of Ephesus means to us today.

For starters, to my mind, She's a shining example of perseverance. Her cult was one of the strongest of the ancient world, continuing until it was literally forced into extinction by the new Christian authorities. Beforehand, however, the temple went through natural and man-made destruction. Nevertheless, it bounced back to its glory each time. Nothing was able to hold Her people down. Even today when we think of Her worshipers as being long gone, there are still droves of Hellenists and Pagans who continue to pray to Her. In the end, not even religious persecution was successful in driving Her image, name and veneration from the Earth. By the Gods, may the same kind of spirit forever reside in us who worship the old Gods still today. We may be freer today in certain parts of the world, but there still exists religious intolerance all over the globe and the threat of persecution in one form or another. Let us be as fearless and dedicated as Ephesus.

Secondly, think of the immense patience, planning, timing and execution that it took to not only build such a colossus as the Temple of Ephesus, but also to maintain it. Everything in our lives that is worth doing takes the same. We build many forms of temples in everything we do, whether we're talking about our religious and spiritual devotion, or mundane things like our careers, education and relationships. The ancient Greeks were determined to perfect to the best of their ability, no matter how long or hard. The worshipers at the temple as well certainly gave consistent devotion, just as we should give to our lives each day.


Prayer to the Goddess
O' holy Artemis of Ephesus,
Lady of the wild,
Mistress of animals,
fertile and nurturing,
Divine caretaker,
loyal Goddess of Greek cities,
come now across the vast universe,
transcending continents,
to be Goddess of the natural world,
and the protector of your worshipers all over the Earth once again.
Declare by your Divine ordinance,
that we who now recite this prayer,
are your people now and forever,
that our devotion be as eternal as your being,
and our lives as glorious as your ancient temples.