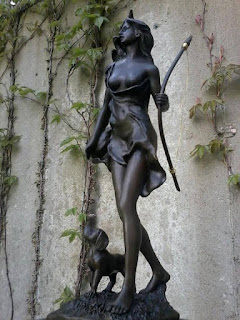 Some people in the modern Pagan community (though not the norm), are ripe with their own versions of the ancient Gods, which in itself isn't a bad thing. But when they basically create their own Gods and give them ancient names and images, that's when I find myself compelled to say something. One of the most common of these has to do with Artemis. She's one of the most commonly-adopted Deities by Neo-Pagans and Wiccans. While these people are a minority in the community, there are still Pagans who want to start a culture, gender or race war within Paganism. Therefore, being a historical Hellenist and someone who has worshiped and studied Artemis since 2009, I want to set the record straight about the Goddess. These are not opinions, these are facts of religious and cultural Greek history.

Claim #1 - Artemis Is Against Hunting
The argument that Artemis is against hunting or meat eating should, in and of itself, be an obvious ridiculousness from the start. She's the Goddess of the Hunt. The first sentence of the Homeric Hymn to Artemis calls Her the "slayer of stags," and talks about her chasing and striking down the wild beasts. To say that Artemis rebukes hunting or opposes the consumption of game that was killed in ancient times specifically for eating, is a blatant historical falsehood.

Claim #2 - Artemis Supports Abortion
Whatever your views on abortion are, that's not the concern here. Not everyone has the same beliefs on the issue. Some are pro-life, some are pro-choice, and some are moderate; I understand that. But to say that Artemis revels in abortion, is simply not supported by anything other than someone's own personal theory. Artemis is the Goddess of childbirth and the protector of infants and children. She carries no historical epithet that refers to Her as an abortive Goddess whatsoever. She fiercely protected the weak and vulnerable. When Atalanta's father threw Her away at birth, it was Artemis who came and saved Her life. Another manifestation of Artemis is the legendary Artemis of Ephesus, which is a multi-breasted form to symbolize Her as "the Great Mother." The ancient Greek religion, in many cases, took a stance against abortion itself in some of its main cultural declarations. For example, the famous physician's Hippocratic Oath, which swears before "all the Gods and Goddesses" to not give an abortion. People in ancient Greek myth who harmed children were also dealt with very severely by the Gods. A good example would be Lycaon, who dismembered a young boy and tried to offer the remains to Zeus, who was so repulsed and offended that He wiped out the entire Bronze Age of Greece.
The historical fact of the matter is simply that Artemis never possessed a title, epithet or function even remotely similar to abortion. Quite the opposite, actually.

As far as the man-hating label She routinely gets tagged with, this comes from the myth that the hunter Actaeon secretly spied on Artemis naked in the forest, and after She spotted him, turned the hunter into a stag and his hounds attacked and killed him. This probably had a far broader ancient meaning. Artemis didn't like sex, and therefore, did not want to be sexualized, and sexualization in those days was largely portrayed between male and female. But Artemis had and still has many male worshipers who show Her proper respects and don't end up on Her bad side. In fact, I built a sanctuary to Her in my yard and She was one of the main Gods I prayed to for help in saving my son's life when he was born prematurely. I am doing fine and so is my boy. I don't think we need to get so caught up in gender that we make everything about gender or sexism. Why can't we be great together?

Learning From The Greek Gods: Artemis 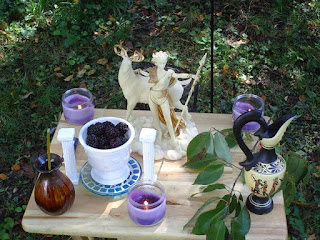 Continuing my series on learning from the Greek Gods, today's entry is about Artemis. Without any doubt whatsoever, Artemis is one of the most popular, worshiped and revered Goddesses ever in the history of the world, and remains so in the hearts and practices of modern Hellenists and many general Pagans. As with the other Gods of the Dodekatheon (the Olympians and highest-ruling Gods), She encompasses numerous epithets, but some of Her most popular have to do with the natural wild world. She's Goddess of the Hunt and the Mistress of Animals. She presides over forests and general wild lands and comes to humans personally as a Goddess of Childbirth and a protector of infants and children. She loves dearly Earth's animals and young ones. Some also call Her Goddess of the Moon, while some sources disagree with that epithet. However, She is a Light Goddess beyond all doubt, and the moon is the largest form of natural light on the Earth beside of the sun, which is ruled by Apollon, Her Brother and fellow member of the Dodekatheon, who is also a Light God. So it's very reasonable, to my mind, to worship Her as the supreme Goddess of the Moon while Apollon stands as the supreme God of the Sun.

However, there is more to Hellenism than just worshiping the Gods. There is also a great emphasis on their teachings and learning from them, so what can we learn from Artemis? Being the Goddess of the Hunt and Mistress of Animals, She adores nature, while also understanding the need for survival that it provides for all living creatures. She's the Huntress, and therefore, She hunts down the stag and slays it. Hunting encompasses the act of killing for food, in the case of humans. Nature provides us what we need to live, but I also think Artemis wishes us to be caring and compassionate with nature, using only what we need, respecting the animals we must kill, and giving them proper respect by using all of their parts instead of just killing for sport. I believe killing for sport would be a high offense against Her, and in my personal belief, I believe deer to be exclusively sacred to Her, and therefore I don't kill or eat them at all myself. But some do, and that's fine within reason. So as She loves and cares for nature, so should we, for how can we honor the Gods without loving and respecting what they also love and respect? And this is true in every case.

Artemis is also the protector of children, and very few things hold more virtue than being a good parent and treating the weakest and most vulnerable among us with love, care, compassion and protection. As She gives these things to children, so should we if we are to call ourselves Her followers and worshipers.We don't serve Artemis best in this field by giving fancy speeches on how something needs to be done to help children. We serve Her best when we actually get out there and do it, making the difference ourselves and being the change, by helping to feed, house, educate and care for children in all the ways they must be. And also, by treating them with love and care and never causing them physical or emotional harm or torment.

There are many great things we can learn from Artemis to help us live better lives and make our world a better place, and these are among the ways we can begin that wonderful journey in our Hellenic lives.

In the Goodness of the Dodekatheon,
Chris.
at November 29, 2015 No comments: