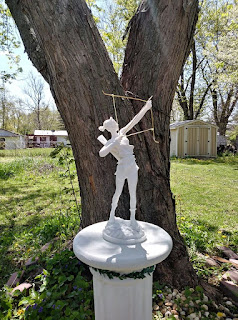 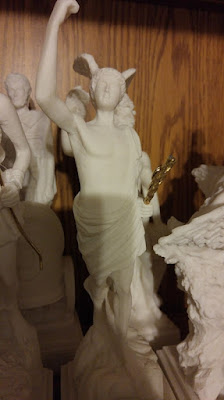 I recently took a part time job at a local retailer to help pay off some of my debts. While it's not a hard job, it's not really something I want to be doing. I work it because, at this time, I need the extra cash. It's the life story of former college students and the like.

On the night of the 28th, I was feeling horrible at work in almost every way imaginable. Depression and anxiety started to kick up and I just didn't think I could go on anymore. I felt all alone and lost in the world and life; I just wanted to give up all together. That was until a woman came to me and handed me something that she, for some reason, had decided not to buy. She placed in my hands a bag of crocus flowers.

I recognized them immediately because I knew they are the sacred flowers of Hermes, the Messenger of the Gods. Hermes knew I would understand they were a gift and a sign from Him. I felt that Hermes was telling me that I'm loved by the Gods and to never give up hope; that the Gods know what I'm going through and are here. In short, the Gods love me and that's the bottom line. 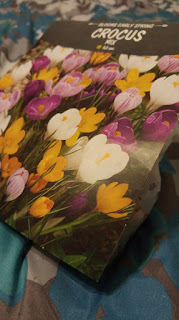 So, I bought the flowers, and placed one bulb in my pocket for the rest of my shift. The God's gift made me so happy and peaceful that work no longer bothered me, nor did life itself. I felt like Odysseus when Hermes gave Him Moly to protect Him from the spells entrapment. Except this plant (the Crocus) was given to protect me from my own hardships, which in themselves were entrapment.

When I arrived home, I offered some of the flower bulbs back to Hermes with a prayer of thanks for His blessings and Divine Guidance. As the Guide of the universe, Hermes can take us by the hand and show us the way down every road and path, and the thing is, when He does so, you know it, like I did this night. It's always of the utmost comfort when you know the Gods are there.

When I Am Broken, The Gods Put Me Back Together

More than once in my life as a Hellene, I have reached breaking points. Even before in my much younger years, I met such obstacles where I had times that tried my nerves, but they've gotten worse at times throughout my life. However, the Gods have never ceased to be there to put me back together. They have never ceased to rescue me from the clutches of ruin. The two most recent examples in my life happened yesterday and back in November 2012 when I was moving my family up to Illinois from North Carolina. I will describe that experience first.

We packed up all the belongings our two cars could hold that autumn and headed north to our new home in Freeport, Illinois, leaving our former lives in Thomasville, North Carolina. During the packing, I had overestimated the strength of my wife's small station wagon and overloaded it so much that, by the time we reached Indiana, the weight began to literally mash the wires out of one of the tires. We ended up broken down in the middle of nowhere in Indiana with a cold night rapidly approaching. We had a spare and jack in the back, but the jack was old and broke when I tried to use it. My wife found that there was a Wal Mart nearby, so I stayed with our baby while she ran to get a new jack. During the time I was waiting, a rescue team came by to see if we were alright, and I explained the situation. They left shortly after. Perhaps I should have asked for help, but I don't know how they could have provided it. After dark, my wife finally returned with a new jack that also broke when I tried to use it.

At this point, I began to panic and I looked up and yelled, "Gods, please help us!" Very shortly after, a couple spotted us and pulled over. One of them was a mechanic with a spare jack, who successfully worked with me to get the car lifted up and the new tire put in place. I firmly believe the Gods sent those kind people to help us. When I thought I was lost with no hope, the Gods sent hope. Unfortunately, this was not the end of our toils. Another tire met the same fate about 12 miles from Freeport, but because we had managed to make it that far, the nearby towing company was able to send out a rescue truck to bring us to our destination. My wife's car arrived on a wrecker, but it got there. I think I am safe to say that Hermes certainly followed us on our travels, as He is the Patron of the traveler.

Yesterday, February 2nd, 2015, I had another dilemma where I just couldn't get it together. I went to pay rent for the month and I noticed that my wallet was gone from my pocket, nowhere to be found. I came back to the house upset because I knew I had just cleaned the place down and I had found no wallet anywhere, so I was certain it was gone. I then checked in the pockets of my second coat which I wore under the first coat. Yes, it's that cold up here at times. But, still, no wallet to be found. This was a bad situation because I had no way to get money and the rent was already due.

I simply got mad, declaring how much I hated my life and the things that happen to me. I don't normally get this upset, but over long periods of time, things build up and come to surface. As I sat down and calmed myself, I knew that the Gods wanted me to control my anger, that it was not Hellenic to allow anger to control me. So I prayed for forgiveness and understanding. Afterwards, something just told me to check the pockets of my inner coat again, so I did, and there the wallet was, as if it had been delivered to me.

What I have learned from my experiences is that, even when it feels like I am alone and abandoned, the Gods are still there, and will help me through the challenges I face. I just have to cool my head and focus, because if I lose myself, I'm not going anywhere.