A Hero, The Love of A God, and Hyacinth Hysteria 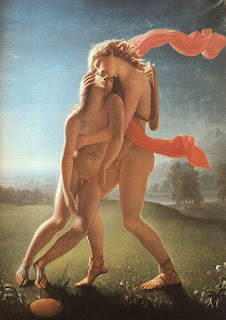 Long before the Hellenes invaded Troy, a cult center stood in Mycenaean Hellas between 1750 and 1050 BCE, southwest of Sparta in a City called Amyclae. The burial mound that allegedly held the remains of the Hero rested beneath a statue of Apollon Himself. The Hero was Hyacinthos, or as we've come to call Him today, Hyacinth. His story has circulated around the world as one of the most beautiful myths, but has also stirred debate over the nature of the tale. Who was He exactly, and what are the real details of His amazing yet short life?
Hyacinth was a Spartan Prince of exceptional handsomeness and became loved by the God Apollon. They played together and the story goes on to say that He was a lover of the God, but Hyacinth was also sought after by Zephyrus and Boreas, the Gods of the West and North winds, and no doubt mortal pursuers as well. However, Hyacinth only wanted to be with Apollon. Some versions say that Zephyrus orchestrated the young man's death out of jealousy by causing a discus He was throwing to fatally wound Him in the head. Other versions paint the event as entirely accidental. In His memory, Apollon took the blood of His slain friend and created the Hyacinth flower, and it of course became sacred to Apollon. The story even goes on to say that Apollon eventually resurrected Hyacinth in some fashion, because later Spartan depictions of the youth show Him with a beard in heaven. Today, Hellenists such as myself still hold Hyacinthos in their theology and spirituality, where He is both a Hero and a God.
Some mythologists and readers of today raise an eyebrow at the tale because they interpret it to be one of pedophilia or immoral attraction, but I would argue completely differently.
We must first remember that, not only is the age of consent younger in every culture with shorter life expectancy, but the story simply says that Hyacinth was a youth or young man; it does not say how old He was. This becomes interesting when examining Spartan and ancient Hellenic culture in general, because reaching adulthood wasn't an age as much as it was an achievement or milestone after completing the City's rites of passage. For the Spartan, one would only become a man and gain citizenship after he passed the Agoge, a 13 year training period that started at age 7 and ended at 20, which is about the time a man grows his beard. In Homer, whose writings deal entirely with Mycenaean culture, Telemachus also becomes a man once his beard has grown in. This means that in ancient Sparta, someone who was 18, 19, or even 20 but not yet graduated and bearded, might conceivably have been considered a youth or young man. Adulthood was a title that was earned, not merely the attainment of an age in and of itself. In conclusion, it's entirely possible that Hyacinth was an adult man by our modern standards, but not yet by that of His culture.
Of course, all of the aging information is only one part of the equation that we can use to theorize and create questions. The other part has to do with the connection between the God and youth itself. Love was very much an umbrella term. The ancient Hellenes had 8 different kinds of love, not just sexual, and they were all powerful and valuable. These 8 kinds of love were sexual, friendship, playful, humanitarian, longstanding, self, familial, and obsessive. The Hellenes understood that in addition to romantic partners, love manifested in many different ways, which is how a polytheist should see it.
There was love between friends, playful and flirtatious love between individuals, love of the human race, matured love, love of self, love between family members, and obsessive love - such as being so in love with someone they are always part of you or always on your mind. It's not necessarily an unhealthy love.
For a couple of examples, I fantasize about my wife all the time. I'm simply fascinated by her and want to know everything about her life. The Hellenes would definitely say that I have an obsessive love among others. After high school, I had a best friend I always hung out with, and we did everything together for about 5 years. We even went to the movies and slept over at each other's houses. I loved him, but it was not sexual, it was friendship love.
So what was the nature of the love between Apollon and Hyacinth? It could have been many things, and I think we today would be foolish to think the ancient cultures were the equivalent of our own. Hellenic religion is beautiful and full of wisdom and knowledge, but it can also hold things that are greatly mysterious, and for us to think about throughout our lives.
In Hellenic spirituality, Hyacinthos can be prayed to for prophecy, music, hunting, sporting, and of course for a strong connection to Apollon. His patronages probably include hunters, athletes, musicians and oracles. In other attributes, He is also a Vegetation God of rebirth and renewal. Good offerings and gifts to Him would be the Hyacinth flower, sunflowers, lyres and music.
In the Goodness of the Gods,
Chris Aldridge.
at July 11, 2022

I Don't Believe In Coincidence 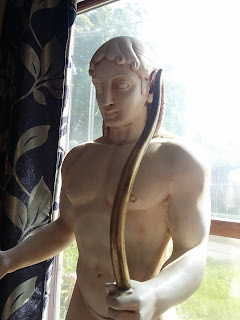 If you have watched the director's cut of the 2004 movie Troy (which I would highly recommend because it's ten times better than the finished product), you know there is a scene near the beginning, shortly after Helen enters the City, in which Hektor and Priam are in the grand room of the palace among statues of the Gods and seats of the Council, discussing whether to send her back to Sparta. Priam eventually begins telling Hektor (his son) about his faith and dedication to the Gods, describing a time when Hektor was a child stricken with Scarlet Fever. The doctor expected Hektor to die before sunrise. But Priam said he went down to Apollo's temple and "prayed until the sun came up." Priam returned that morning to find Hektor fully recovered.
This scene has always stuck with me because I too know what it's like to be a father praying to Apollon for a sick son. My child was born severely premature, and I don't think there was a day that went by that I didn't pray or think about the Gods when I visited the NICU. Of course, Gryphon's story didn't end when he came home. He's made a tremendous impact on everyone who has known him, and I haven't stopped praying for him. In fact, it happened again just recently on the night of July 1st - 2nd, 2022. On this day, he was not feeling well. He slept most of the entire time, wouldn't eat, and vomited once in the evening. I'm always worried about my son because he's my little buddy, who I love more than the world. We were planning on taking him to get medical care if he didn't show signs of improvement by morning.
Around 1 or 2am on the 2nd, I was sitting in the living room playing one of my favorite video games, just trying to relax. But I couldn't get my son off my mind, so I simply prayed, "Apollon, God of healing, remember my past sacrifices and please hear my prayer, heal my son of his illnesses." Literally, the very second after I finished that prayer, I heard my son exclaim happily all the way down the hall in the bedroom. Then he opened the door, went into the kitchen, and started eating and drinking again. He was fully recovered by morning.
I mostly don't believe in coincidences, especially if they happen at the exact moment you'd expect, or perfectly in sync. Apollon has always been a God very close to me and my family. But I also find that there is never a time in my life when I don't feel close to all of the Gods. No matter what's happening, I know they're always good to their people.
In the Goodness of the Gods,
Chris Aldridge.
at July 03, 2022 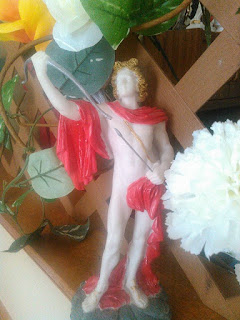