Holy War That Shook Ancient Greece To The Core 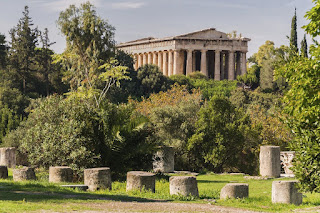 As we saw in the First Sacred War, the victory of the League of Delphi resulted in the destruction of the town occupying its harbor and the restoration of Apollon's Temple. Delphi had won her first holy conflict, but it would be only the beginning of religious and economic fights over the center of the Greek world.

Athens has always taken powerful and pivotal roles in ancient Greek history, and even today they hold tremendous influence as the capital of modern Greece and the most populated City of the nation. Although, we must remember that in ancient times, Greece or Hellas was not a unified land. Each City State had its own government, laws and religious observances. In the decade of the 440s BCE, the imperial power of the City of Athens began to flex its muscle into central Greece, and the fact that Delphi was there did not go unnoticed, neither by Athens or its biggest rival City, Sparta.

Not only had Athens spent a lot of time, money and effort dominating the Delphic sanctuary with their own dedications and even a treasury whose ruins still stand today, but Athens also started to control and influence all the areas around or within proximity of Delphi, and the people who would strike this match were the Phocians. Phocis was a central region of Greece in which Delphi resided, and the people wanted to incorporate it into their jurisdiction, probably not only because of the influence it held over the Greek world, but the immense amount of wealth that was accumulating there. But it appeared as though the Phocians were not strong enough to do it on their own. They managed to enlist the powerful aid of Athens in removing the independence of Delphi.

Sparta had frequently consulted the Oracle of Delphi and had begun establishing their presence in the sanctuary. They did not like the fact that Athens was literally the master of the Temple and the City, so they decided to send troops to overthrow the Phocian control and return Delphi to its full independent state in 449 BCE. Sparta succeeded and Delphi was again ruled by Delphi alone, which the people of the City and Temple were extremely grateful for. They even erected dedications to the Spartans for their liberty.

However, the victory was brief. Two years after the Spartans left, Athens sent its troops under the command of Perikles and restored Phocian rule, establishing a tug of war in central Greece. But by 445 BCE, independence was again won by Delphi, noting the fact that Athens had to eventually turn its attention fully to Sparta in the Peloponnesian War by 431. Athens, at that point, simply did not have the time or power to keep Delphi locked, and would end up losing the war to Sparta after nearly 30 years of brutal fighting. Further conflict would not return to the City of Delphi for around 100 years later, what would come to be known as the Third Sacred War. For the time being, Delphi would once again remain a free State.

Read my post on the First Sacred War here.

Scott, Michael, Delphi, A History of the Center of the Ancient World, Princeton Publishing, 2014.