The Sexism That Never Occurs 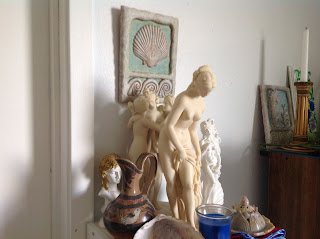 Some people, whether they're Hellenic Polytheists, Pagans, or just historians, tend to think of ancient Greek religion as being sexist to some degree. I've even read this from other ancient Greek Pagan authors such as Laura Perry. I think it's clear, however, that some authors and historians simply desire to stick to their own one sided view of things, because they never talk about something even as ancient as the Homeric Hymns saying that Hera is revered "no less" than Zeus. In other words, they are equal in the powers of Divine Male and Female. There is no sexism there. They also won't mention how the most revered religious leader in the Greek world was always a woman (the Oracle of Delphi), nor do they bring to light the societal powers that Spartan women held. I'm not saying there weren't women-haters in ancient Greece, but it's unfair to judge an entire culture by the opinion of one playwright, or even the opinions of 20 philosophers. But this post isn't strictly about historical records. Instead, it's regarding the interesting fact of my own Hellenic worship.

When I am praying to the Gods, calling out male and female names, there's never, in my mind, a dependent connection between their power and their gender. In other words, I don't think Zeus is King because He's male. I think He's King simply because He's King. I don't think Athena to be the champion of battle because She's female, but simply because She is. Besides, with most Divinities of the Greek world, you can normally find a reasonable gender counterpart, such as Poseidon and Amphitrite, or Aphrodite and Eros. It's true their sexes are essential parts of their identities, and it's disrespectful to call them something they're not, but a gender preference never occurs to me. Sexism is just not something that makes itself a relevant factor, nor should it. To me, the Gods simply are, requiring no other reason. And indeed, there are certainly female Gods who hold positions higher than some male Gods.

I suppose for some people, no matter their religion, it may be hard to see Deity as someone different from their own self, but when it comes to a Polytheist I think we understand the immense diversity of the universe and all the life around us, that we as humans are but one part, and everything and everyone doesn't have to reflect our personal selves to be powerful, beautiful and relevant.