Why Do So Many Pagans Get Upset With The Word "Worship?" 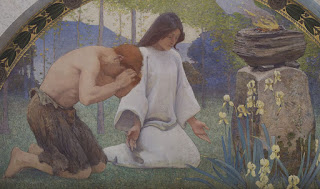 Talk to some modern Pagans about their Path, and they'll say things like, "I don't worship the Gods, I work with them." It is obvious, to my mind, that their former lives as Christians or monotheists have left a really bad taste in their mouths, and so they associate even terms our Pagan ancestors identified with as being inherent of the Abrahamic traditions. They came to Paganism, in part, because they wanted to get away from the self-loathing and "groveling" that is often associated with the mainstream faiths, and get into a religion or practice where they could have a more direct relationship with Deity. This is understandable, but worship doesn't inherently mean anything Abrahamic. Worship simply means, to pay reverent (respectful) honor and homage to a God. Any time you do this, you are giving worship. So even something as simple as recognizing a God as a God, means you have given worship. Ritual, prayer, hymn, sacrifice, and art, if centered around a particular God or Gods, are all forms of worship, because you have given respectful honor and homage to them.

It's similar to people who have the same bad taste in their mouths and say they are, "Spiritual but not religious." Religion is defined as having a set of beliefs or practices concerning theology. So even if your beliefs and practices are your own entirely, you are practicing religion. It doesn't have to be inherently tied to an organized group of people, denomination, or church to be religious.

Our Pagan ancestors were most certainly religious, and they most certainly worshiped, and yet they were not Abrahamic. The ancient Greeks, for example, loved, revered, and feared their Gods, and they didn't believe they were equal to the Gods, but yet they were still the beacon of light for the intellectual, physical, and societal advancement of the Western world. They saw nothing about religion and worship that demanded they be anything less than what a human could, or that they despise said fact. They simply realized that, even with all that humans could achieve, there were still Higher Powers to be respected, admired, and thanked for making life and the Universe possible in the first place.