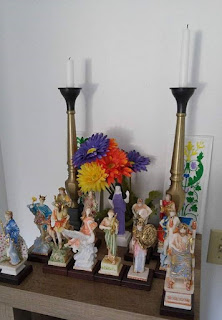 When you live as an ancient Greek, you find an inherent flow of the Greek spirit through you before you even realize it. For example, today I purchased a new book on the way of ancient Greek life, which stated that the enjoyment of life and the acknowledgement of how delightful the world is, constitutes the hallmark of the Greek spirit. This is what I have felt and told people in philosophy for the longest time, but had never read it in actual context until now. When Greek lives within you, it's like all that is Greek also comes with it. You don't have to always willfully put it there. The Gods reach down and mold you into the identity of their people.

I have said in the past that Hellenism has made me religiously the happiest I have ever been in my life, and this is true. A large part of that reality is the simple fact that I experience so much joy, wonder and intrigue on a daily basis with the Gods, Spirits, Heroes, and the stories, myths and customs of ancient Greece. 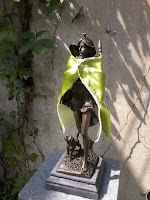 My first pleasure is that I wake up each day knowing that I am part of a vibrant, growing and supportive community. When I first began joining the national group Hellenion, I attended a libation rite to Hermes through their online broadcast. It was one of the most spiritually uplifting times of my life; to be there with people who felt like brothers and sisters, who believed in the same Gods as me, as we worshiped together in union and friendship.

Of course, the real and ultimate beauty is the Gods and the spirituality of the religion. I love waking up to the beautiful sunshine, knowing that my day begins and ends with Gods all around me. The morning begins with Eos, Helios and Hemera, the latter two throughout the entire day. During which time I can pray to, worship and honor so many wonderful Gods relevant to everything, from Zeus in the sky, Artemis over the forests, hills, wildlife, and animals, Aphrodite in love, Poseidon of the seas and rivers, Athena for my strength and protection, Apollon for healing, light and inspiration, Hera for Motherly guidance and nurturing, Hermes on my travels and publishing endeavors, Demeter for my great foods and beautiful fields, Dionysos for life and joy itself, Hephaitsos for creativity and invention, Ares for success in the battles of life, I could go on and on even beyond the Olympians. When night draws close, I am in the presence of wonderful Gods like Nyx and Selene. There is never a time when the Gods are not there. 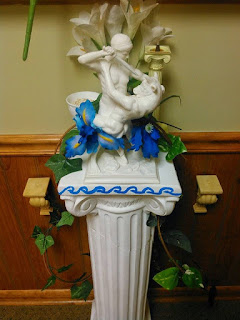 As such, I love building beautiful worship spaces, sanctuaries and temples to the Gods, as I have many of such structures at my home. At the Shrine of The Dodekatheon, incense burns throughout the day to all of the Gods, focusing on the 12 Olympians. Below it rests a shrine to the Heroes and on the last level an altar to the dead and ancestors. I also have an outside sanctuary to my town and region's Patron Goddess, Artemis.

I also love the fact that there are so many wonderful Heroes and Heroines in our religion we can pray to and interact with, some of which are my Patron Heroes, namely Theseus. As with the Gods, the Heroes can encompass a wide range of epithets. Unfortunately, there's no ancient list, so we have to use fact-based reasoning behind it. For example, in His story, we know that Theseus traveled on foot across the Greek landscape to Athens, and along the way, put an end to criminals and monsters. Therefore, when I go out during the day, I may invoke Theseus the Traveler to see me safely there and back, especially if I am walking somewhere. So when I take my evening walks, I pray something like, Theseus the Traveler, bless and watch me on my journey tonight. Another example might be Antigone. We know She died for Her choice to do what She thought was right, despite being ordered to do what was wrong. So in tough decisions of right and wrong, I may call on Antigone of Honor. My prayer may state something along the lines of, Antigone of Honor, help me to do what's right, instead of what's desired.

As a devout Hellene, you'll also notice that ancient Greece is always on your mind, and flows through your whole body and life. I can open, for example, Plato or Homer for the answer to literally anything I am going through or want advice on. These sources of philosophy, myth and religion alone are 2,400 pages long. And keep in mind, these men are only 2 sources for the religion and worldview. I never run out of things to learn from or stories to experience.

I'll never give it up. I have only one regret; that I didn't find Hellenism sooner.