Learning From The Greek Gods: Zeus 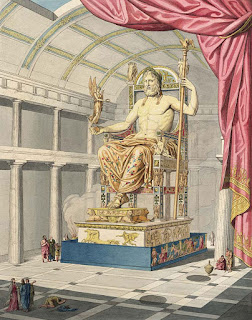 My series Learning From The Greek Gods is finally nearing completion as I present the next chapter on Zeus. The ultimately highest God in all of Greek belief, surpassed by none, is Zeus, the King of all Gods. He also rules over the universe and mankind itself, and is thus called "Father" by all Gods and mortals. Thunder, lightning, and rain or any atmospheric accumulation is attributed to His power, presence and authority.

Being the last born child of the Titan rulers Kronos and Rhea, Zeus was sent to Earth by His mother to be raised in secrecy away from the destructive clutches of His father. Upon reaching adulthood, He overthrew Kronos and freed His preceding brothers and sisters who joined Him in the New Rule of the universe. Zeus is also the biological Father of many powerful and famous Greek Gods, such as Athena, Hermes, Apollon, Artemis, Hephaistos, Ares and Dionysos.

Evidence of His Supreme Authority is found in all of Greek religion, such as The Iliad when we are told that once Zeus makes a ruling, absolutely nothing can change it, neither man or God. Only He Himself could alter the course. His will has to be carried out without exception. That's one reason why I sometimes petition Zeus's favor even in prayer to other Gods.

There's a lot to learn from Zeus. He's the ultimate leader in any given situation, fearless and resilient. He never gives up and is never dictated by anything other than His own mind. He's the ultimate individualist who knows He's powerful, knows what He wants, and makes it happen. In our own ways in human life, we too have our own powers and ability to be a leader, an individual and attain what we desire or deserve. The only twist is that we are mortals, and if we do not practice this with moderation, we can go from confident to very arrogant and boastful.

Zeus is also the God of Hospitality. He very much believes in treating guests, suppliants and strangers with kindness and generosity, which is the hallmark of being hospitable. To our fellow man and woman, we are taught the truth that we are all human beings and worthy of human dignity. To treat a fellow human as a subhuman, especially in your own home or establishment, would be among the most dishonorable of human offenses. By Zeus, we are taught the universal value of honor and human worth.

In the Goodness of the Gods, and our Father Zeus,
Chris Aldridge.

Sources:
Picture of Zeus is in the public domain, because it was published in the United States before 1923.
at September 01, 2017