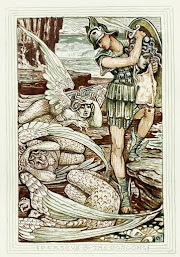 I'm astounded at the idiocy. That was my conclusion when I saw the latest political and social statue to be unveiled in Manhattan recently, sparking news coverage from the New York Post and other outlets. A statue dubbed Medusa was erected, with a sword in one hand and the severed head of a man in the other, dubbed Perseus. This design, apparently, was done to represent the Me Too sexual victims movement. As there are those of us, many of us, who still worship the Greek Gods and follow ancient Greek religion, this story naturally made its way around online Hellenic groups for all to see, including myself. At first, I thought about ignoring it, but later realized that something so outrageous in so many ways, warrants a response from a Hellenist as well as an American man.

I've done posts on the story of Medusa in the past, mainly concerning the idea of the vilified rape victim she is often portrayed as, pointing out that so many people don't realize that this version of the story isn't Greek at all, but Roman. It was not said that she was turned into a Gorgon. It says she was born among the Gorgons, of which there were three. They were winged spirits. In Hesiod, it never says she was raped by Poseidon, or raped at all. It never even says the sex took place in a temple, which was said by some to be the reason for her punishment. It says in Theogony that Poseidon laid with her in the spring flowers. That's it. Then it immediately talks about her destruction by Perseus. There is not a single word of rape, a temple, or being unjustly punished for it. Again, I will say, Medusa was NOT a rape victim in Greek myth, which by the artist's own admission, is what the statue is based on in Manhattan. I would also like to add that Gorgons aren't always portrayed as destructive or chaotic in Greek religion. Their images are used as well for protection. Alexander the Great wore one on His armor.

The second issue concerning this new statue is the obvious hatred it's trying to raise toward men and causing division instead of unity, which is something we don't need more of right now. I find the statue's image to be a promotion of sexism, just the other way around, especially since the victim was clearly killed on the basis of gender and Medusa was not. The artist claims the statue was built and placed in this area to honor the destruction of the sexual predator Harvey Weinstein. So the question begs, why not his head in her hand instead of Perseus or a man in general? Essentially saying that men are monsters is the product of simpleton ignorance, and not a productive way to address the gender and sex issues our society faces. This is unfortunately what has happened with this statue whether the creator intended it or not. I can only imagine the outrage if the genders of the statue were reversed.

The bottom line is that it will only make people into enemies and spread resentment based on sex, which again, is the continuance of sexism in our society. While there was and is certainly a major problem with the way women are viewed and treated in our country, we must realize that each person is an individual in America. Generalization is dangerous, and has been the cause of every form of discrimination and oppression.