In Search of Greek Heroes: Ajax 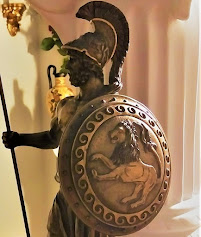 Welcome to my summer series for this year, In Search of Greek Heroes, where I hunt for the facts and myths behind the greatest Heroes of ancient Greek religion. Today we are looking for the mighty Ajax. You may have heard of Him before in less epic narratives. If you look on or underneath your sink, He's probably a household name you know. The toughest cleaning agents ever made for common man have been named after Him. But the real man comes to us from Homeric Epic, The Iliad. Hellenists like myself go to great expense and labor to furnish and decorate their temples, sanctuaries, treasuries and libraries, so I was delighted when Ajax became the Patron Hero of my temple this year.
When I teach about this great Hero, I normally begin by telling people that there were, in fact, two Ajaxes, those being Ajax the Great and Ajax the Lesser. The one normally worshiped is Ajax the Great. Of course that's not to say that Ajax the Lesser cannot be. All of the great men of Homer are considered Heroes, even some who were not Greek. While Achilles was the greatest warrior of the Hellenes, Ajax was by far of the greatest stature and strength, referred to as the Bulwark of the Greeks, possessing a fearless character and a highly intelligent mind, probably notably when it came to battle and strategy. He was also known primarily as a defensive fighter of the Greek lines, camps and ships, and a man of great honor and nobility. In fact, there are no Homeric depictions of Him initiating a fight, only defending against attacks, and after the duel between Him and Hektor, which is called as a draw, the two men exchange gifts with one another. Ajax was also notable for fighting to recover the bodies of dead Greek warriors for proper honor and burial. One of the most favored of the Greeks by the Gods as well, as Poseidon, at one point in The Iliad, uses His trident to restore Ajax's strength.
Ajax met His untimely end when the Trojan War starts to come to a close. There are different explanations as to why it happened, but it is generally accepted that He committed suicide. If true, we know today that there are lots of reasons why veterans of wars meet these ends. But one of the great things about Greek religion is that while something such as suicide is not admired, it is always possible to be redeemed from errors. Just because you commit an offense in this life, does not mean you cannot ascend to higher levels in your more enlightened State. After His death, Ajax received Heroic honors, worship and even festivals in the Greek world. The island of Salamis even hosted a temple and statue to Him, along with a festival called Aianteia. He also became a Hero of Attika who received worship by the Athenians and statues in His honor.
At the turn of the 21st Century, archaeologists began to excavate around the area where it was believed that the residence of Ajax or at least His family once stood, on the island of Salamis. They brought to the surface a palace of over 8,000 square feet. The structure, it was found, had been abandoned around the time of the Trojan War. Pausanias, the ancient Greek traveler and writer who lived in the Roman times, reported that abnormally large bones had been found on the seashore of the former Trojan landmass, near the Greek City of Sigeion. These, he wrote, were declared those of the washed out grave of Ajax. The bones were ordered to be reburied by the Emperor of Rome. There appears to be no modern coordinates for these remains or their new burial site.
My Temple's Prayer to Ajax
written by me.
O' great Ajax,
colossal to men,
noble to Heroes,
holy to Gods,
as our sacrifices pour out,
and burn sweetly to you,
bless our prayers,
that your strength empower us,
and your shield and spear defend.
Watch our backs,
guard our temple,
protect what is ours,
and clothe our bodies and minds in the armor or heaven.
In the Goodness of Ajax,
Chris Aldridge.
at July 05, 2021

In Search of Greek Heroes: Bellerophon

Welcome to the new series I have decided to dedicate my blog to this summer, In Search of Greek Heroes, where I search for the facts and myths behind the greatest Heroes of ancient Greek religion. Today we are looking for the magnificent Bellerophon.

Also known as Bellerophontes, His name means either Wielder of Missiles or Slayer of Belleros. If the latter, it means that this name was given to Him later in life. Therefore, the question would then be, what was His original name? It has been suggested to have been Hipponous. However, this name was also given to other figures in ancient Greek history. It appears to have been a general title for certain kinds of men. If Bellerophon was not His original name, we may never actually know what it was. His birth and death dates remain unknown, but is believed to have lived before Herakles, who, according to some, lived around 1303 to 1259 BCE, which means Bellerophon predates the Trojan War. Writings of Him go as far back as Hesiod and Homer, who lived during the Archaic Age, around 750 to 650 BCE. 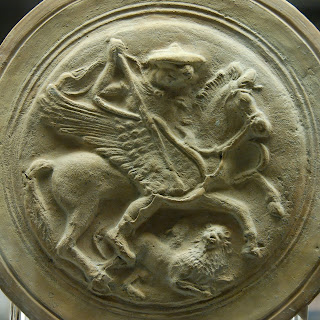 According to His story, Bellerophon was the Prince of Korinth (a City that, in Bellerophon's life, was actually called Ephyre), born to Poseidon and the mortal woman Eurynome, who was queen and wife of the King Glaukos. Growing into a man of superb strength, ability and beauty, He was admired by the people of the City, but when He accidentally killed His brother, He was exiled to find a way to purify Himself of the killing, as would have been ancient Greek custom. Murder, and we are lead to believe here, even manslaughter, was considered to be among the worst of pollutants upon a human being, and in order for them to be a blessing to the City or be in the presence of the Gods again, they would have to be purified of the pollution.

In Argos, He found a man who could and would purify Him, King Proetus. Being restored to good standing as He was, His hard times were just beginning. The king's wife wanted to sleep with Bellerophon, but the Hero refused her, being of such honor to not offend or wrong the man who had given Him such wonderful hospitality and assistance. However, the wife became enraged at the rejection, and falsely accused Bellerophon of raping or attempting to rape her. She demanded that her husband execute Him, but the king did not want the pollution. So he sent Bellerophon to the King of Lycia in Asia Minor with a note saying to kill the young Hero. The King of Lycia also refused for the same reasons. However, The Lycian king thought of a way around the offense. He sent Bellerophon to kill an infamous beast that had been ravaging the countryside, a horrid creature known as the Chimera, half lion, snake and goat.

Athena gave Bellerophon a golden rein by which He could tame the winged horse of the Gods, Pegasos, and use him to destroy the monster. Upon the back of Pegasos, the Chimera was unable to strike Bellerophon in any way. There are conflicting accounts as to how Bellerophon killed the beast. One says He shot it to death with arrows. Another that He placed a clump of lead onto the end of a spear and rammed it down the throat of the fire breathing monster. When it melted, she died. And finally, that He used the lance to stab her to death.

He then returned to Proetus, who was not finished devising ways to kill Him. He sent the Hero on a campaign against the mighty Amazon women whom He also defeated. Nothing the king tried could conquer the young man, and he concluded that He must truly be loved by the Gods. Proetus gave Bellerophon his daughter in marriage. But during His life among mortals, He began to think of Himself as a God, and wanted to fly to Olympos on Pegasos. The horse, however, threw Him off and He crashed back down to Earth. We are told He lived out the rest of His life with His injuries.

Finding Bellerophon isn't an easy task, as traces of Him are not anywhere near as readily available as people such as Alexander for instance. 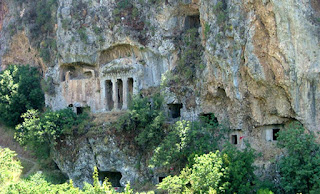 One of the most compelling things is the Tomb of Bellerophon that still stands today in Lycia, which is a rock-cut temple tomb near Tlos, an ancient citadel in southern Turkey. This tomb was discovered empty. However, the porch has a relief of Bellerophon slaying the Chimera that can still be seen today. The tomb and those around it are not easily accessible, but people still visit and enter the structures.

The tomb is only dated to the 4th century BCE. However, it's also possible that the remains of the Hero could have later been placed there. Today, we have bodies from Egypt dating back thousands of years. Why couldn't the ancient Greeks or Lycians have had remains that dated back about a thousand? The tomb also appears to hold 4 to 5 chambers, which could have been used for the wife and children of Bellerophon or His descendants. No one knows. It's a place of great mystery and intrigue.
Moving on from the tomb, I decided to look for Bellerophon in the mentioning of regions outside of Greece as well. The Amazon warriors, whom He fought, were thought to be Scythians, as called by the Greeks, who are Iranian in origin. This means they were Persians. So is there any mention of Bellerophon in Persian history or myth? For starters, there are creatures in Persian myth that have a resemblance to the Chimera, those being the Manticore and the Shahmaran. What the Chimera actually was, if something different such as a deformed beast, we may never know, but there are similar mentions of this creature in the myths of the East as well as the West. While  Bellerophon was not found in Persian religion by my research, the creature that is central to His story, we might conclude, was in one form or another.
Bellerophon remains one of the most beloved and worshiped Heroes of ancient Greek religion to this day, where He will continue to be found in the hearts, minds and prayer books of so many.
In the Goodness of the Gods,
Chris Aldridge.
Note To The Reader
Thank you so much for taking time to read my latest writing. Without your viewership, my site would have no purpose. The upper right side column of the site holds some of my best books if you wish to read more of my materials. Thank you again, because while Polytheism and Paganism are growing religions, we are still a minority, and Hellenism is a minority within that minority. Your readership and financial support makes it possible for Hellenists like me to continue helping and representing our religious community and likeminded people. To this day, I have published over 300 posts on history, myth and religious practice for our people. If you have already read all of my books, you may send a donation to my PayPal address at chriswaynealdridge@gmail.com. May the Gods smile on you.
at May 21, 2021