Is Giant DNA Still With Us Today? 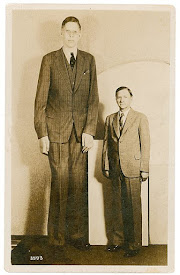 Robert Wadlow and His Father, before 1937

As far back as ancient Greece herself, there have been stories of giants who walked the Earth, made trouble for smaller people, and even unsuccessfully warred against the Gods. While people today scoff at the idea as a mere fairytale or a story invented to make kids go to bed, I've taken time to do my own brainstorming as a mythologist on the topic, and I have developed a theory to present. Generally put, the stories of giants are not false, incorrect or misinterpreted.

Let's begin by examining the average height of an ancient Greek male, which was 5'7". Even today in America, that has only increased by 2 inches. Six footers and above like myself, are not the norm. However, we also know that there have been extremely rare cases of people who have grown to extraordinary size and height, such as Andre the Giant and Robert Wadlow, Andre being 7'4" and Wadlow 8'11", and from my own state of Illinois.

These incredibly large people achieve their status not through a fairytale, but hard genetics. Both men had what is called gigantism, which is the result of abnormal or very overactive hormones and glands. And here's the kicker about Wadlow; at the time of his death, they could not conclude that he had reached his maximum growth. That's right, it is possible that he could have gotten even bigger. He also possessed amazing strength, perhaps the kind that would have been used to help build what we know as the Cyclopean Walls.

An average person looking up at these colossal people would certainly think of them as what they literally are, giants. Because these conditions of great size are science, what if it is, in fact, the rare DNA of ancient giants, that continues to sometimes be handed down through the human line? People today think of giants as those who reach to the clouds, and are even monsters, but that doesn't have to be the case. To me, there is no question as to whether giants existed. We have seen them with our very eyes.