I Feared Death Until I Knew Haides 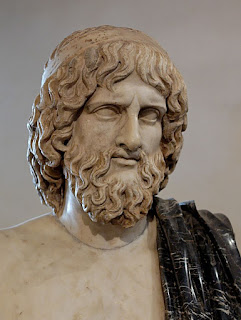 Even His worshipers obscured themselves from His sight. No Divine name, arguably, made the Greek heart tremble with fear more than Haides, God of the dead. In popular modern fiction, He is portrayed as a villain and even ignorantly equated with the Christian devil, even though He never served any such function. However, Orpheus calls Him "Excellent," and I include Him in my daily prayers with a smile on my face and joy in my heart.

I grew up Christian, so I have always been a theist, but I feared death immensely until Hellenism. The belief in Jesus never relieved that stifling anxiety, only the ancient Lord of the Underworld did. That's not to say I look forward to dying, or think that this life doesn't matter. Quite the contrary. I have simply come to better understand death. The afterlife is not the focus of Hellenic religion, life is. However, we must also realize that death will one day come, and knowing Haides has given me wisdom instead of fear as many would come to expect.

There is an immense peace I have come to find in and around myself with Haides. Many of you probably had no idea that one of His Epithets is Nekron Soter, which means, "Saviour of the Dead." Into His care, He takes those who have passed on from this life, saving us from the burdens of this world and securing for us a peaceful and intriguing place. There is nothing to fear, for I know I will be going into the hands and realm of a wonderful God. The beauty of Divinity that we experience on Earth, will continue to surround us in the afterlife, and wherever I go, it will be free from the ailments I have lived with. Whether I go to the Underworld, the Isle of the Blessed (Elysium), or the endless possibilities of reincarnation, the ancient Greek God has filled me with a calmness and security that, in some ways, cannot be put into human words. It is literally a language only known to the Gods, and merely felt by mankind.

Dying has been called passing away because it's the most appropriate term. There's actually no such thing as a complete death, only the destruction of the temporary body that we all have. Your body will die, but you will not. Dead, to my mind, is simply a term to identify those whose bodies have went through this process and are now in spiritual form. It's just another step along the path of life.