Day With The Druids 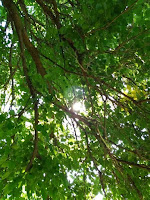 Autumn is my second favorite season, summer being the first. So yesterday afternoon, in very beautiful weather, I decided to attend a local Druid gathering, part of the ADF, in Rockford, Illinois, to celebrate the turning of the seasons. One thing that interested me in Druidism is that their central idea is simply a love and reverence for Nature, not necessarily a set theology. While they do call on certain Gods, namely Celtic, a Druid, to my understanding, is not made to take a vow to uphold one specific theological idea or worldview. There are, indeed, Hellenic Druids, and probably Druids who are monotheists or don't have any gods at all. I thought, I can jive with that, because I love Nature too and it doesn't conflict with my Hellenic beliefs at all. 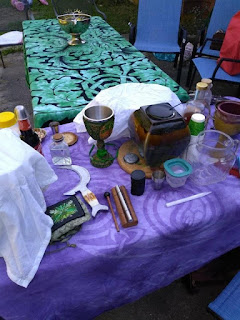 The nearby group, called a Grove in Druid terms, much like a group of Hellenists may be called a Temple or a Demos, is ran by a friend of mine who invited me to attend back when the gathering and ritual was first planned. I had never before attended a Druid rite, so when it began, I was intrigued to see some similarities with Druidism and Hellenism. As within Hellenism, a central burning flame is ignited during the rites, although not necessarily for the same reasons. To the Greek, the fire may symbolize Divine presence, while to the Druid, it may represent one's inner spirit and connection to the Divine Ones.

The Druids invoke Gods who are obviously not Greek, but who rule over the same things that Greek Gods do. In other words, it would be very easy for a Hellene to create equivalences, such as when they called on the Earth Mother and their Forge God named Goibhniu, whom I would call Gaia and Hephaistos. They went on to invoke the Spirits of Nature and the Ancestors, which Hellenists do, and they also venerated their local river as a Divinity. This as well was and is done in Hellenism. In ancient Greece, local rivers and even springs received worship from their locals. The giving of sacrifices and libations were done pretty much the same way as a Hellene might do by pouring or placing them on the ground or in a holy container. So I didn't feel like too much of a foreigner religiously. There were, of course, some cultural differences, like the fact that a Druid's holy drink is ale, and for a Hellene it's wine. The rite was very clearly Irish and Celtic. However, I saw it as an opportunity to not only be Pagan with other Pagans around me, but to learn about another way of life. I didn't see the differences as being enough to build a wall of separation.

There was one particular thing the Druids did that I really enjoyed, and that was the concept of The Well. A fairly large bowl of clear water was set up in the middle of the altar to symbolize this cosmic entity, containing universal holy waters made so by the Kindreds, aka the Spirits of the land, the Ancestors, and the Shining Ones (Gods, Goddesses and Heroes). To take from this Well and into yourself is considered a sacred drink, and once ingested, the blessings of the Kindreds reside within you. We also ate of bread as well with our drink, but this was more on the concept of sharing sacrifice with the Gods, which the Greeks also did. You might remember, the Greeks had a rite of holy ingestion too, though far more complicated in cult setting, that I wrote about some time ago concerning Dionysos, and of course, the Christians took these concepts and ran all the way home with them into their holy communion. But The Well just really made me tingle with intrigue. I am very much a naturalistic person, so my deep love is found in very natural concepts.

I found the entire rite to be quite uplifting, and importantly, thorough. Sometimes, Pagan rites are done in a few simple movements or actions, or they continue through to completion entirely with one or two of the same movements or actions. This one, however, took its time and covered all of its very large, diverse theological and naturalistic bases. It actually taught me some things about ritual structure itself and gave me some new ideas in terms of templates that I might could fill in with Greek religion for my own public rites. I was very impressed with how detailed the Druids were, and how they touched the Divine, Nature and the worshiper on every level possible - mind, body and spirit completely. If there was ever a religion besides Greek that could be called a universal system in that it reaches out to everything, it's that of the Druids.