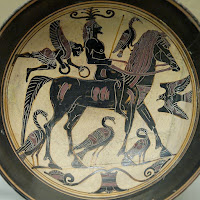 In the Goodness of the Gods,
Courage and Honor,
Chris Aldridge.
at September 16, 2018