Theseia ~ A Way To Celebrate The Oktober Rite 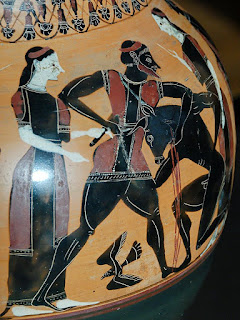 On October 8th, Hellenes everywhere will recognize or celebrate the ancient Festival of Theseus, the founder and Hero of Athens and her democracy, and the slayer of the infamous Minotaur monster who devoured innocent young girls and boys of Athens until Minos met the only man who wasn't afraid of him, Theseus.

Years ago, or so it seems, I constructed a rite to the Hero that anyone can practice, not only during Theseia, but any time they like throughout the year, the purpose being to honor and worship the Hero and bring His presence into one's life and/or home. Permission is granted to the Hellenic and Pagan community to use this rite whenever and wherever they like, so long as credit is given to me, its author.

1) To begin the Rite of Theseus, place in the center of your shrine or altar a statue of Theseus, or a picture or representation of the Hero. Do the proper cleansing of the altar, the offerings, and yourself.

3) Bring forth and recite the journeys and times of Theseus with the following recitals, and offerings or gifts placed after each reference or invocation.

Journey to Athens
"The long, lost son of Aegeus He was, born in blessed Troezen, and lifting the great stone to find the gifts His father had left behind, and taking them into His possession, the great sword and sandals, to make His journey to blessed Athens, that He may reunite with His father and claim His birthright. Along the way, many enemies and evildoers did He encounter, and thus He slayed them that they may be punished, and the Hellenic people freed. O' Theseus, who brings rescue from evil and ruthlessness, I welcome you as a Savior, and to you sweet fragrance must be given.

Destruction of the Minotaur
"Sailing the beautiful Aegean, Theseus on the sea, mighty Sailor, He bravely traveled to the island of Minos to free the people of Athens from the tyranny of the Minotaur and the oppression of the Minoan monarch. He confronted the half-man, half-bull monster in the endless labyrinth, and struck the beast dead to the floor of the maze. Never again would Athens yield and submit, for Minos now knew the power of Athena's people. Theseus who brings us salvation from tyranny and oppression, I welcome you as Liberator, and for this greatness, a great libation should be poured to you."

Unification of Attica and the Founding of Panathenaia
"To the region of Attica, scattered and divided, Theseus brought the Union, both of land and people, into the great State of Athens. He founded its historic democracy which has since inspired the free world, He created its brilliant festival of Athena's people known as Panathenaia, and He pushed Athens to the heights of its most glorious and influential times. I welcome you, Theseus, as the great Unity, the Founder of free government, and the Father of our festivals, and in that honor, I give you a beautiful fabric of my home, robes given for a King, to see you with delight and wrap your statue/image in beauty."

(Wrap the Cloth Around)

4) Grand Invocation
"O' Theseus of Troezen, Hero and King of Athens, slayer of the Minotaur, lead me to victory over the monsters in my life, free me of tyranny, and bring me to liberation, through the goodness of the Gods, and the grace of Athena's blessed City."

5) Closing Prayer
"As I bring my holy and sacred rite to a close, I give thanks to Theseus for hearing my prayers, delighting in my gifts, and blessing my home and life with the goodness and freedom that He brings. As Athens declared, Nothing Without Theseus."

(Blow Kiss of Love To The King)

Final Note- Consider finishing the rite or the day with a feast in honor of Theseus.

Also know that I wrote a book on Theseus some time ago. Consider purchasing a copy if you would like to learn more about Him by clicking on this Link.