Learning From The Greek Heroes: Atalanta 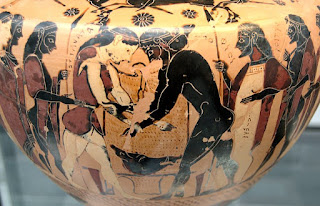 Atalanta (Atalante in Greek), is the Heroine Huntress of Arcadia (Arkadia). From the time of Her birth, She was faced with hardship. Her father, wanting a boy or simply not wanting Her at all, threw Atalanta into the wilderness to die; he just left Her in the middle of nowhere. Artemis, being the Protectress of infants and children (namely young girls), found and cared for the baby. In some versions, Artemis sent a mother bear to save Atalanta's life. Others say hunters found and nursed Her into health. Either way, She escaped death by the blessing of the Gods, and because of this graceful act, She was Divinely favored. Growing into a powerful Huntress and servant of Artemis, She at first shunned men all together. In reality, why wouldn't She? The man who was supposed to have loved Her the most, threw Her away. Nevertheless, She later in life entered a foot-racing contest against potential suitors, all of which failed but one. He beat Her by throwing down golden apples, or in other words, Atalanta simply could not resist Her attraction to him, and to this man She eventually married and gave up Her chastity.

What is there to learn from Atalanta? For starters, sometimes I pray to Her against the "ruthlessness that has always plagued mankind." This ruthlessness I refer to in prayer is what happened to Her as a child. Still today, parents kill or abandon their unwanted children. It's something that has sadly always been with humanity, and if Atalanta teaches us anything it's that the Gods expect us to care for our children; it's our duty as decent human beings, and I pray that Atalanta, by the mighty power of Artemis, shows us the way. 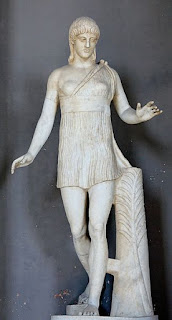 Being a Huntress and a lover of the wild, Atalanta obviously had tremendous love and respect for nature; it was Her home. If anyone ever understood that humans are part of and dependent on nature and not separate from it, it was Atalanta. Without the wilderness, She would have known no place of being. She teaches us that, without nature, there is no us, and we need to always care for, protect and preserve it.

Lastly, Atalanta, throughout most of Her life, was very much Her own independent person. She relied on Herself in many ways. Sometimes, that's what we have to do as well. We have to understand and harness our own inner strengths and abilities to get through life or to achieve our goals. We can't always expect others to be there, or things to be done for us.