Pegasus ~ Heaven's Horse and His Relevance To Our Time 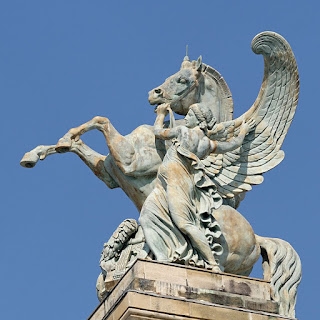 I want to start by wishing everyone a happy new year, and begin 2017 by discussing one of my favorite topics concerning ancient Greek religion and mythology.

Of the many wonders that entered our world in the times of old, one of the greatest was Pegasos (Pegasus in Latin). The winged stallion helped Hellenes like Bellerophon complete their quests into Heroism and to conquer evil within the universe. Pegasus, whose name means "sprung forth," was born from the blood of the infamous Medusa when Perseus severed her head off. Said to be a child of Poseidon, which would make sense seeing that Poseidon is the Creator and God of Horses, the great steed came forth as the horse of the Gods, and has since been a favorite of Zeus, King of all Gods. Originally, Pegasus was all-wild and only Gods could control him, until men like Bellerophon came, and even He had to have Divine assistance in some form. Without Pegasus, Bellerophon would not have been able to defeat the Chimera.

Pegasus was born immortal, which means he can never die, and thus, the glorious creature is still alive today, and it is said that the horse now holds the thunderbolt of Zeus, and it was also believed that Pegasus was the horse of thunder and lightning directed by Zeus Himself. Others say that Pegasus is one of the horses of Eos, the Dawn Goddess. He appears many times in ancient Greek mythology and religion, and also in modern governments. The present city of Corinth, Greece has him on their official seal, obviously in homage to their local, ancient Hero Bellerophon. In fact, Pegasus is their city's official emblem, perhaps proof that the many centuries of persecution that tried to remove the old religion and the old Immortals from Greek society have failed.

Pegasus greatly aided in the destruction of evil and chaos, so it may not be a surprise that his image has also been adopted by certain armies, such as the British Paratroopers in World War II. Britain stood alongside us in the war to fight and defeat the evil Axis Powers, those being Nazi Germany, Imperial Japan and Fascist Italy, and we did beat them too. Pegasus has always been harnessed by those of goodness, and commonly, those favored by the Gods, to ride forth and vanquish that which is not good, orderly, civilized, etc.

More than being a Divinely-favored, immortal horse, Pegasus also possesses great personal powers of his own, some even being abilities of creation. At the mere stomp of his feet, it was said that he was able to create water sources, such as the Spring of Hippocrene on Mount Helicon. One might, therefore, look to him as a protector of waters, specifically springs and wells. Someone may not even be outlandish, if they get their home water from a well or small stream, to place a statue of Pegasus there for its purity and protection, and/or do an invocation for his favor upon them on a regular basis. Generally speaking, Pegasus holds the power of flight, creation, and quite literally, of life itself. One might say that he is untamed universal power that, when properly channeled, results in tremendous goodness. His relevance to our world, and in the spirituality of a Greek practitioner, is abundant even now.

To call on Pegasus for the waters, one might say something like this,
By the favor of Zeus,
which I now humbly request,
I lovingly invoke the presence of great Pegasos,
that by his noble and powerful feet,
blessings will be brought to the waters now before me,
that they may give life and vigor to the body,
make fertile the ground,
and run forever pure.

The spirit and presence of Pegasus is alive, and will be so forever. Still today in our modern world in general, statues are made of the glorious being, as if somewhere inside of us, we are still hoping that hope itself hasn't been lost, and that the glorious favor of Divinity will once again come upon his back. He awaits in the stables of Zeus, ready for the chance to fly again.

Invocation of the Gods' Favor Through Pegasus, by Chris Aldridge
O' Gods of Olympos,
send to me your favor as the great stallion and steed,
winged-Pegasos who soars about the skies,
for I humbly invoke you, the great Dodekatheon.
I pray he carry me upon his back,
in your power and might,
virtue and valor, wisdom and wellness,
and also that of his own glorious being,
for with him I can triumph over all troubles,
soar over all obstacles,
and stomp over all monsters,
as they are crushed beneath the hooves of heaven's horse.
Come, noble and valiant Pegasos,
spread your wings over me,
that the favor of all that is Divine shield me from evil.
Lift me to your back, that we may take flight in the Olympian name,
conquering the ailments that plague my life,
and that which hinders the goodness of mankind.