The Age of Iron and The Fate of Humanity 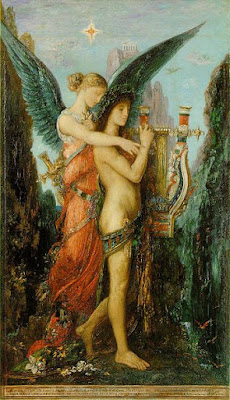 Hesiod, the ancient Greek writer, talked about the present stage of humanity, naming it the "Age of Iron." Although Hesiod has been dead for almost 3,000 years, reading his prophecy is an eerie thing because, the more you study it, the more you realize how accurately he is describing our own present time, and what's more disturbing, is that he lists it as the last Age of Man, although he does talk about human life beyond it, so we are led to believe that human life may resurface. He describes it as a time of complete dishonor and immorality, a time when people who do evil will be praised, and those who seek to do what's right will be condemned. That humanity will be plagued with evil and pain, that children would harm their own parents, and would carry out acts of unscrupulousness even in front of the Gods. Shame will be nowhere. The fate of this Age is its ultimate destruction by the hand of Zeus, the King of the Gods.

When I look at the world around me today, I see so much of Hesiod's forecast. In many ways, those who do evil, immoral or unscrupulous things are held in praise, or at least not held in contempt by our society. If an armed citizen stops a mass shooting, the media does not praise them for the hero that they are. Rather, all we hear about is the shooter, and while they are not glorified, our society tries to consider their lives and feelings. Children also go to great lengths to dishonor their parents, as Hesiod said they would. How many times have you heard of someone taking away the money and/or property of their elderly parent, abusing them, or dropping them off outside a nursing home and diving away, leaving them to the mercy of whoever is found to care for them? Simple immoralities and disasters also plague us. For example, lies are more profitable than truths, goodness rarely receives any support, wars over riches are commonplace, hard work never ceases to be a requirement for living, and pain is everywhere and in mostly everything at some point. Hesiod predicted that these things, and things similar to them, would take place in the Age of Iron. But what else exactly does Iron mean? For we know that we live in a time of many, many elements. So what does he mean by calling it by this metal? I think iron could also be a metaphor for the technological or industrial age, because we have a reliance on iron to do our work for us. Even in the realm of modern fiction, one of the most popular superheroes is Iron Man. Iron is the way Hesiod found to best label our time period.

This is one of the reasons I feel it's so important for us to focus on doing good things and be charitable toward others, so that our race of humans may avoid the eventual and ultimate displeasure of the Gods. And I still retain hope for our Age. I do not believe we are inevitably fated, but that we can alter ourselves, as we do have the power to change its course. The fact that we are more than capable of doing good and making the world better, means that we are not doomed to the contrary. And fortunately, the Gods are still with us and still give us their help and assistance against evil or chaotic things. This is why when I do my prayers to Zeus each week as the highest God, I begin by saying,

"Zeus, be merciful toward our Age, and guide us, for we are Iron."

Our fate, should our Age continue its road, is that it will cease to exist. It might even be that we end up destroying our own Age before the Gods can, that we will destroy our own race of humanity by our actions. Hopefully, however, we will change ourselves, and beyond our time, a new Age will emerge to bring a brighter day for humankind. But as I live each day, I see myself as someone who can make that new Age possible in my own time. We can change it. We can be the new.

Wow, I didn't know you still blogged. It's becoming a lost art. Thanks so much.

Well, I'm a writer, and these are some of my writings. It's one of my literary outlets. I am, however, creating for myself a real, professional website soon.

I come here to defend the so called lost art of blogging! Every once in a while I bump into the statement that 'blogging is dead' yet reality seems to contradict this claim. People blog in linkedin, people blog on their wordpress sits, a blog on your own webpage is still a blog, oh yeah and perhaps you all have heard of an obscure and little known website tumblr.com? Yes most are comprised of little more then a constant stream for funny gifs but they still count as a blog.

I say it's more this particular platform (blogger) that is somewhat dead because, it seems google has done everything in its power to drive into the ground since they bought it, which is done for a very purposeful reason.

There are lots of groups that would benefit from the extinction of blogging. I mean if I were trying to control public opinion in mass, I sure as hell wouldn't want everyone and their grandma to have their own little soap box on the internet where they can voice their opinions, and expose their readers to a point of view that may not be congruent with what the "mainstream" has deemed suitable for public consumption.