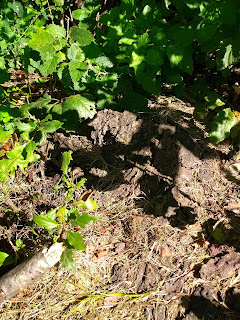 In the Pagan community, we often talk about building shrines and altars, but have we ever considered that there are natural altars everywhere around us, that nature Herself has built? It is great that these things exist and that we can find them, since Pagan spirituality is often if not entirely connected to Nature and the Natural Universe. There are essentially four main kinds of natural altars that I myself have come to identify in the soils of the world. The first on the right is one of the most common. You may have to click the picture to enlarge it that you may see the structure, but it's an above ground root system that has ascended a significant portion above the soil. Offerings can be left in the narrow spaces of the roots, or if a libation, drenched over the roots themselves. Water or flavored water is recommended for this kind of altar. Alcohol or too much milk may be bad for the plant system.

Now because the root system is part of a tree, the natural soil, and perhaps a forest, there are certain Gods tied to them, and these would be the best Gods to honor at these places. The Gods include Artemis, Pan, Demeter, Dionysos and Gaia, or generally speaking, the Dryads or Forest Nymphs. If a specific tree like an oak, olive or laurel, very specific Gods such as Zeus, Athena and Apollon can be honored successfully, since those trees are directly sacred to these Deities. You could even honor local Elemental Spirits at these places by pouring libations to Gnomes or Elves for instance, since they are known to be dwellers of roots and trees. 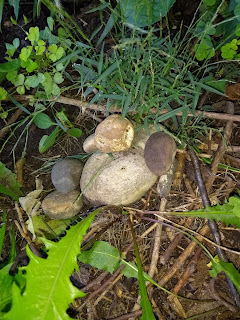 The second place in nature that makes a great altar, although sometimes requires some assembly, is a rock formation, like the picture on the left. As far back as ancient times, and still today, Pagans and Polytheists used/use stacks of natural stones as altars over which they pour libations. In my own religious past, I've also burned incense upon them. Some formations, obviously, are quite larger than others. You may encounter a massive protruding ledge or boulder in a park or forest, or as with the picture, you could simply come upon a few small pebbles that can be stacked or brought together into formation. Some people have even taken stone to craft their own unique altars, likes ones I have seen at Pagan sanctuaries. A raised stone or rock surface is a natural altar. Any God, Spirit, Hero, Deified Mortal or Ancestor can be honored upon these structures. 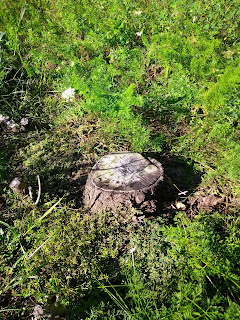 The third place for a natural altar is one of my favorites, and is probably very easy to locate if you live in an area with forests or a good tree population, and that is a simple tree stump, left over after a tree has fallen or been cut down. The picture on the right will give you a good example. Many may think of stumps as being quite large, but they can be of any mass, big or small. They make great natural altars because of their often flat surfaces and various openings, which can be used to receive libations, or hold offerings or burning incense on their surfaces. Because they are attached to the ground, you could even designate and ordain such a place as your worship area if it rests on your own land. And once again, it's very fluid in spirituality. Anyone can be honored upon them. 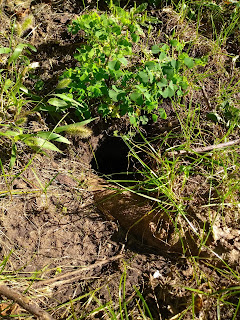 Finally, the last natural area is not so much an altar, but rather a depositing area, and that's a natural hole in the ground, like the picture on the left. Offerings can be left in them and libations poured. Since it's basically the beginning of a tunnel underground, Chthonic or Underworld Gods should be honored through them, such as Haides, Hermes, Persephone, Hekate, and Charon. Spirits of the dead such as Ancestors, Passed Loved Ones, and Heroes can also receive offering here. And Nature Spirits or Elementals can be offered to through underground regions, such as Dwarves. However, there is something very important to remember with these places. Make sure you can see the bottom of the hole, that the floor of it is visible. This probably means that no small animals live in it, and therefore you won't risk drowning a poor creature or being bitten by it. If there is a bottom that is visible, this won't be a problem. Even if the small opening is the home of a creature who is presently not there, the liquid will soak down into the earth and not bother them when they return. It would also be a great place to burn incense in. If you still don't feel comfortable doing it, you can always dig your own small opening in the ground for temporary use.

There is as well something called a tree clearing, a place in a thick forest that has no trees, where trees are noticeably absent. You can see trees around you, but there is perhaps a 15 to 20 foot radius where there are none. These will normally be marked by lush grass, flowers or other natural growths, and are great sanctuaries for Pagan activity. These areas are naturally formed, not man-made, which is an important factor. There are some places in the forest where the trees just didn't grow or grow as much, and this is a proper clearing for the Pagan. An immediate or recent man-made clearing is not natural, and therefore not Pagan. It could even harbor negative energy or angry Spirits. A man-made clearing will usually be identifiable by the presence of freshly cut wood, downed trees, and no vegetation. The ground will usually be covered in mud or straw. While the forest and plants can and will return over time, it's not an immediate place to revere or enter.

With all that being said, it's also entirely possible to build a natural altar yourself from natural material, such as digging your own burrow like I said, arranging stones, or even stacking loose roots or sticks themselves. When I lived in Thomasville, North Carolina and was just starting to get into Paganism, I actually built an altar to Artemis in the forest beside my home, which I still have records of in an old Witch Almanac I had at the time. It was a collection of three massive and hollow branches that had somehow ended up twisted together on the forest floor. I creatively propped them up against a nearby tree near its base, and from there, I declared it to be an altar of the Forest Goddess Herself. As far as I know, it is still there 10 years later.

Don't forget that you can use the locations of the structures, and the structures themselves, to focus on Deity. You have the examples above in the 2nd and 5th paragraphs, but there can also be a number of other things to consider. For example, if next to a well, spring, river or ocean, invoke Poseidon, Aphrodite, Amphitrite, and/or the number of fresh and saltwater Spirits and Nymphs, such as the Nereids (saltwater) or the Naiads (freshwater). If near a place of forge, workmen or craftsmen, honor Hephaistos or the Creation Forces known as the Kabeiroi. If on or near a place where battles took place, Ares or the Spirit of courage Alke. If certain animals inhabit the area, like female cows who have not yet given birth, focus on Hera. There are a number of identifications all around a given place if you look.

There are a few notes to remember about natural altar areas. For one, root systems, trees, groves and burrows can be dwelling places or sanctuaries of Nature Spirits or Elementals. It's important to show proper respect when approaching these places and doing things in or around them. Be hospitable not presumptuous. In ancient Greek times, not only were the Gods everywhere, but also Spirits at every corner. Finally, use common sense safety measures. Although highly unlikely to cause a spreading fire, make sure you don't leave burning incense unattended, or try to roast something upon dry wood. Keep the offerings simple and manageable, staying always respectful, and it will remain a wonderful place to engage the Pagan Universe.

In the Goodness of the Gods,
Chris Aldridge.
Posted by Chris at 6:57 PM