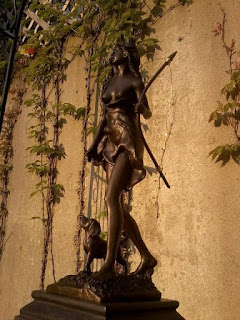 The year was 1984 or 1985 when John of Freeport, Illinois saw something that would alter the course of his life. He was not Catholic, or really any particular religion, but attended the local St. Thomas institution because he had no other choice, and found himself on a school retreat to the local Oakland Nature Preserve with his class on this occasion.

John is an adult now with his own house and family in Freeport. He's also a good friend of mine and invited me to his family cookout today where he told me what happened to him as a child during this time. With his permission and approval, this story has been told here, and I thank him greatly for being kind enough to give me such a treasure to share on my blog. However, he also requested that I don't reveal his last name or picture at this time due to his family issues. Things are too stressful right now for them to have to deal with any direct or abundant publicity.

The night it happened, the hour was around 10 when John realized that, unlike his classmates, he couldn't fall asleep, so he decided to go for a walk in the woods even though it was against the rules at that particular time. Everyone was supposed to be in bed and locked down for the night. John didn't care, and he knew well enough how to work the door lock so he could get in and out, a talent that seems to be natural because, still today, John is a magnificent inventor and engineer. The moon was full and bright enough to where he could see his way around in the dark and he eventually came to rest near a creek, listening to the owls and watching the bats catch insects.

At some point, everything went dead silent, not a sound of anything. As John described, it was something that happens when a predator approaches, and he knew enough about survival to know that you don't run or make sudden movements at that point, so he remained still and observed. The first sound he heard that broke the silence was that of what was clearly a deer approaching from the nearby trail. When it came into view, John saw that it was a large buck, and stranger, it appeared to be ghostly. As John described, he could see the trees behind it. The beast looked at him for a moment. Then a falling branch echoed. The buck looked behind, looked forward again, and dashed off, leaping a great distance over the creek and heading through the woods.

Then on the same trail, came the sound of someone running. "Who the hell is out here at this time of night running through the woods?" John wondered. As the two stampeding feet came into view, he saw that they were attached to a beautiful woman in a white tunic-like gown, with long black hair, a quiver of arrows on her back, and a silver bow in her hand. She caught sight of John, stopped, and said to him, "You're not supposed to be out here." In his childhood attitude, he replied, "Yeah, but neither are you." She smiled, "I figured you'd say that." Then, she asked John where the deer went. He pointed her in the right direction and she was off, never to be seen again.

When the next day came, there was a time when John thought he had simply dreamed up the encounter while asleep in his bed, but then, he explained, he went back to the creek and the trail to see the footprints of the stag exactly where they had been, both on the trail and on the banks of the water. "I knew I didn't dream it," he said. John would eventually come to realize that he had encountered Artemis with his own eyes and talked to Her with his own voice, and She to him. "That was the first and only time I've ever physically encountered a God," he finished.

What makes John's story even more interesting for me is the fact that I have also seen Artemis in my dreams, and we both describe the same appearance and features, without ever having disclosed them to one another beforehand. We also had the same feelings in Her presence. The fact that there is an immense peace and calmness, and equally that, while admiring her beauty, we never became sexually interested or thought sexual things. Artemis is a Virgin Goddess who doesn't like sex and doesn't want to be sexualized, and both John and I had a revelation together today when we described our encounters, because we realized that it's actually not possible to sexualize Artemis in Her presence. It never occurs to you. Sex simply doesn't exist there. It's not possible to go against a God. A mortal is completely subject to their will. During the entire time that he and I saw and interacted with Her, we admired Her beauty, but nothing sexual ever ran through our heads at all. We knew we were in the presence of a Divine Virgin at that point.

I have known John for many years, and equally know that he has absolutely no reason to lie to me about such a story. He had never even told it publicly until I posted a Facebook thread asking my Pagan friends about childhood encounters with Pagan Gods. He decided he would wait to tell me in person, but he also didn't even ask me to publish the story. I asked him if I could do so. John had no reason to tell me a falsehood, and nothing to gain from it.

I certainly thank him once again for allowing me to talk about such magnificent experiences with Olympos, and hope that Artemis visits him again.