Why Are Greeks Returning To The Ancient Gods? 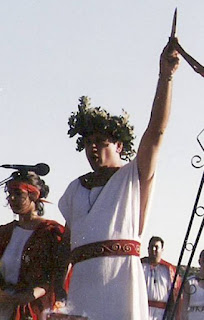 Pagan and Polytheistic revivals are popping up all over the world, and Greece isn't an exception. More and more Greeks, perhaps slowly but also surely, are returning to the worship of the Gods of their ancestors, aka the Greek Gods. While it's important for Hellenists and Pagans to celebrate, it's equally important to know and understand the reasoning behind this emerging societal shift. It will help us understand our past, be solid in the present, and push on into the future.

Recently, I went online and caught up with Vlassis G. Rassias, a leading spokesperson in Athens, Greece for the modern ancient Greek religious movement and founder of the YSEE (Supreme Council of Ethnic Hellenes), to ask him what he thinks about the resurgence. According to him, when freedom and democracy began to regain a foothold in Greece in the 80's after the nightmarish military dictatorship of 1967-1974, the ethnic Greeks began to resurface. In fact, he said, religious freedom had been oppressed ever since the formation of the Neo-Greek Christian State in the 1830's after Greece won independence from the Ottomans. In short, a serious lack of oppression has allowed the ancient religion to come back. I finished by asking Vlassis about his personal devotion and what brought him to ancient Greek religion. According to him, the final straw came in 1976 when a Christian monk literally smashed apart the statue of Zeus outside the Ministry of Education in Athens. Thus began his rebuking of Christianity and his allegiance to the ethnic religion of Greece.

I noticed that in talking with Vlassis, two things stand out. One, that Greeks are returning to the old Gods because they are now free to do so, and two, they have seen what the Christian church has done and wants to do to Greece. They are realizing that their ancestors were converted by force, which was still being applied in the late 20th Century. This realization, I think, also makes people realize they have been lied to and enslaved by the present establishment, and it makes them want to seek their true identities that were taken from them. To this day, ancient Greek religion continues to grow, with 5,000 to 10,000 in Greece (which can't account for the number of people who may still be in hiding), and among the Pagans of America that number over 1 million, there are certainly many who worship the Greek Gods as well, if not exclusively like myself.

I feel I should include my own self in the topic as well, since I am also a Greek Polytheist. Although I'm not from Greece, I am still part of the ancient Greek religious movement abroad. In spirit, mind and deed, I am certainly a Hellene. Of course, mostly everyone knows of my conversion story from 2009, when the Greek Gods answered my prayers in the time of my family's greatest need, but I can also relate to the things said by Vlassis. I grew up Christian, and learning about how so many parts of the world had been forced into conversion, lessened my trust in the church and the religion. Not to mention the persistence, especially in the southern states, of trying to force Christianity on everyone, whether they wanted to accept it or not. There was still, of course, freedom of religion, at least on paper. But many parts of society and even the state and local government officials don't always want to respect it. Then, of course, there's the simple fact that Christianity just isn't the right religion for many people.