Are You Truly Socratic? It Can Change Your Life 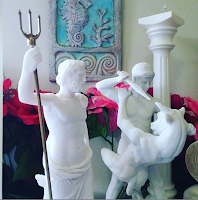 Socrates taught to think for yourself. But I have found that many of us, even as we grasp that concept, don't do it in the way Socrates did. The mere fact that several of us are persuaded by the opinions of others, or have a crisis of faith at times, proves this. Last month, as I was going through my routine of scouring the used bookstore in Freeport, Illinois for lost ancient Greek treasures to house and preserve in my private library, I had the privilege of stumbling upon a title called "Socrates' Way" by Ronald Gross. It's not an antique publication by any means, as it was published in 2002, but the writer of it has helped even someone as studious as me. In a nutshell, the book teaches the reader how to think like Socrates in a way that will not only change their life, but help them build confidence in their own beliefs and judgement. While Socrates was always committed to learning something new, he held firm to the things he truly believed or found to be accurate. Such was the case during his trial, when he refused to denounce the validity of his mission, or that he had been sent on it by Apollon.

I think too many of us allow others to determine how we think and feel about something, even things we hold deeply dear to our lives and worldviews. In other words, I think people have a bad habit of letting other people think for them. The Oracle of Delphi told people that it was up to them to make their own personal judgement regarding the advice she gave. Even the world's most renowned Oracle did not try to make people follow a particular line of reasoning, and yet her predictions and teachings were still true to their core. A good example of this was the legendary response she gave to Croesus, who inquired about invading Persia at that time. She stated that if he did, he would destroy a great empire. She was right, but it was his own empire that he destroyed, even though he interpreted it to mean the Persian, which came to be known as the Battle of Pteria. She was correct, he just made the wrong judgement for himself. Another was when she told Socrates that he was the wisest of all men. He did not interpret it to mean himself personally, but rather, that the wisest of men, like Socrates, understand that their wisdom is little to nothing. It was up to the receiver to ultimately decide the meaning of her words for their lives, or even to reject it.

Part of being Socratic, and really being Hellenic, is not to have arrogance in your beliefs, but confidence. Even in liberal groups like the Pagan community, you can find people who will tell you that you are doing things wrong with your religion or spirituality. When I was a Neo-Pagan, I had people left and right telling me I was wrong, sometimes calling me a heretic. There are even rare times as a Reconstructionist when I encounter an individual I don't agree with. For example, I have read some Hellenists who don't pray to Greek Heroes outside of Herakles, because they believe it to be a localized custom and not relevant or appropriate for someone outside of that locality. Many years back, I even met a guy who didn't believe that humans can talk to the Gods directly, but that we have to ask lower spirits for intercession, essentially. While these people may be a minority in the community, they still exist. Of course, I disagree with all of their views. One might call be a "PanHellene," because I incorporate ancient Greek spirituality from everywhere in the religion. I pray to all and firmly believe that we can talk directly to any level of Divinity, but if I allowed their opinions to tell me how to think about the Gods and my religion, I'd never feel spiritual or anything like myself. I have enough confidence in my own beliefs and views that I'm never thrown off my course. For the longest time, I allowed myself to be disrupted through a lack of confidence, and eventually, grew sick to death of it. I became tired of letting other people, even those close to me, tell me what to think or how to feel. You'll notice that you feel depressed, enslaved, even hopeless when you allow this to happen, but when you finally become an individual, you feel liberated. There's a reason for that, the reason being that you were always meant to be your own person.

This doesn't just go for religion and spirituality either, but all things that make you an individual. If we allow other people to tell us what to think, or how to feel, we will have a change in our minds and emotions every single day of our lives, because there's always going to be someone with a difference or disagreement. When you let someone put their own mind inside your head, you've lost all.