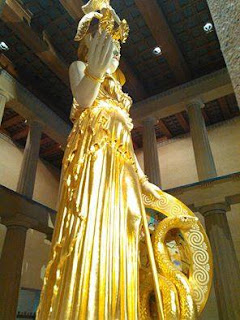 It's April Fools Day, so here's a fool, was my initial response when I came across a facebook video posted by Hellenic Awakening of a Christian Pastor named Pastor Dowell, walking into the main chambers of the magnificent Nashville Parthenon. There he gets on video, calling Athene ugly names, calling Her a "false God," and threatening to "take a sledgehammer" and destroy it. He also makes a reference to the Goddess Nike who is in the hand of Athene's statue, equating it with the popular shoe brand. He's apparently too ignorant to realize that it's not the Goddess who is named after the shoe, but the shoe that was named after the Goddess far later in human history. I'm willing to bet he doesn't even know what the name Nike means without looking it up. The video was posted on his own youtube channel last summer, but was uploaded to the Hellenic facebook page this year. For those who wish to see this magnificent display of human idiocy, I will put a link at the end of this post, but for now, I want to talk about my thoughts on the matter in full.

One of the first thoughts that ran through my mind was the fact that he's clearly a radical Christian and monotheist who hates the old Gods, yet he pays money to enter Athene's temple, money that will be used to help maintain the facility and the things inside it, including the statue. Maybe he didn't think of that initially, but it's amazing to me how he would be so dedicated to his hate that he would actually help support what he hates just so he could film it for one minute and fifteen seconds.

I'm not really concerned with his personal religious opinions about Athene or the Greek religion. For two thousand years, we've heard these rants about "false Gods" and the host of other insults the anti-Polytheism crowd throws. The Greek Gods have been more real in my life than Jesus ever dared to, that's for sure. But whatever he personally believes, I could not care less about. It's what he threatened to do next that has me upset. He said he wanted to take a sledgehammer and destroy it, meaning presumably the statue of Athene.

The fact that he would somehow think he has a right to destroy something that other people spent a lot of money building and maintaining, really shows not only how crazy he is, but how little he regards other human beings. It shows what he thinks of the human right to freedom of religion, expression, and private property. Everyone who built, maintains and admires that temple is completely willing to give this pastor his religious freedom, but he's not willing to give it back to them in return. What's notable is how comparable his words are to that of the Islamic State, who also goes around taking hammers to statues and other ancient relics.

I also find it equally disturbing that no Christians have come out to condemn his words.

There are some things I think we need to consider here. One, the Nashville Parthenon should be notified of this man issuing public threats against their establishment. I do plan to contact the facility soon and inform them of my concerns. I will also be sending a copy of the video along with it. Two, it should remind Hellenists and Pagans that the threats to our rights and the things we hold dear are still, unfortunately, very real in our time. We've been facing it for centuries, and sadly, it still hasn't ended. And three, consider donating to and/or being a patron of the Nashville Parthenon so they can remain strong and growing. I've been there twice to give reverence to the Goddess, and it truly is a wonderful place.

The man ends his video stating that our nation doesn't fear his god. Well, that's one of the best things about the United States. No one is obligated to fear his god, or worship his god, or do anything that supports his religion or worldviews. Rest assured, our founders had people like him in mind when they wrote the first amendment, guaranteeing freedom of religion and protection to all human beings. It's still extremely vital that we don't forget that, and are always prepared to stand and defend it against tyrants, fascists and terrorists. 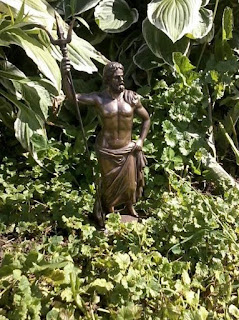 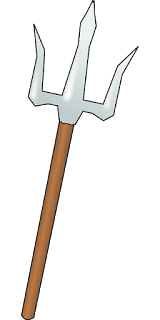