The Shotgun Wedding That Started A Holy War 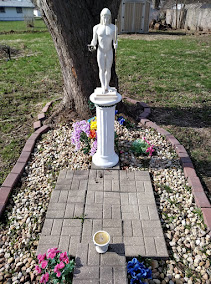 In the name of liberty, to Apollon's temple once again!

The bones of the first two sacred wars were now lying still in the soil, but as has been said, only the dead have seen the end of war.

Historians would more than likely conclude that the conflict had been brewing for a while, but this part of the story starts on the day of a wedding at the sanctuary. A father by the name of Crates became outraged, to say the least, perhaps even insane when his soon-to-be son in law Orsilaus got cold feet and cancelled the marriage. Not only did the father have the groom executed, he also murdered the groom's family members right in the sacred areas of Delphi itself, which was the worst religious offense. The fact that the father supported Theban domination at Delphi and Orsilaus supported Phocis, probably did not aid in resolving tension between the families either. Some say the execution and murders likely had political ends as well as revenge. We will remember that in the last Sacred War, Phocis remained in control of Delphi, and the power struggles between the Cities were far from over.

As punishment for the pollution of murder in a sacred area, Crates and his family were faced with heavy fines, and the feud between Thebes and Phocis over Delphi would only intensify from this point. It all came to a head when the League of Delphi, who has been victorious in the past wars, came to support Theban power, and Phocis, unlike in the last Sacred War, was losing strength and support fast.

At a meeting between the League and Phocis, which no doubt included talks about the actions of Crates against Osrilaus, the Phocians found themselves to be charged with basically the same thing Crates had been convicted of, impiety, blasphemy, sacrilege, etc. Phocis faced heavy fines as a result. Phocis, however, refused to bow to the League or the emerging Theban power, but at the same time, knew that defiance would inevitably lead to physical confrontation. Therefore, they attempted to end another war before it began. In 356 BCE they conquered Delphi. However, they surely knew that this was not the beginning of the end, but merely the end of the beginning. If they had expected Greece to remain passive, they were wishful thinkers.

That summer, the League forces reunified, retook Delphi, and dethroned Phocis from its position of supremacy. Because of their eventual defeat, and probably their desire to remain important at Delphi, they began to comply with the original demands of the League. But the Third Sacred War was far from even a remote close.

In 355 BCE, the League decided to punish Phocis even more for their actions one year prior and attacked them with military force. The conflict was apparently too much for some of the Phocian leaders to handle, as their General committed suicide and even his replacement was killed in action. Nevertheless, Phocis was determined to take the war to whatever ends necessary to win. They robbed the temple's treasury and broke down valuable metal objects they could find in the sanctuary. This resulted in the immense loss of much of Delphi's history, story and economic stability. The theft was, in large part, to fund their army, but it probably also struck a blow to the spirit of the City, or so they might have thought. Religious work and consultations of the Oracle went on uninhibited.

As the fourth year of the war came in, it was clear that it was only a matter of time before Phocis collapsed, both from bankruptcy and military setbacks. However, a friend of Delphi to the far north would be the one to put the final nail in the coffin: Philip of Macedon, father of Alexander the Great. He had received word from the League and was asked to intervene on their behalf, which he did because of his dealings with and great respect for Delphi. By 346, Phocis was not only thrown completely out of the temple and sanctuary, but banned from having anymore influence over it. Even what remained of the Phocian City State was divided up into small neighborhoods, probably an effort by the League and Philip to ensure they could never again unify in power. Finally, Phocis was forced to pay monetary compensation for all they had destroyed and defiled.

Delphi emerged the victor once again, although they could never get back the originality of their geographical glory. What had been destroyed, was destroyed. But if there's one thing to always remember about ancient Greeks, it is that they will press on despite any obstacles.

Source: Scott, Michael, Delphi: A History of the Center of the Ancient World, Princeton Publishing, 2014.