The Gods Give Us Emotion To Make Us Moral 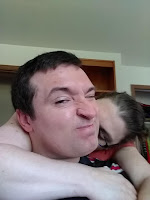 An epiphany was what my wife and I called it last night, during our discussion on the Gods, nature, and emotion. Many times, we humans tend to think of our emotional side as a weakness, as we are the most emotional of all other beings on the planet. It's true that we can sometimes be irrational, but the benefits of our emotional state far outweigh the debts. In the grand picture of things, it's hardly a weakness, but a necessary virtue. Being the most powerful and smartest mortal creatures on the planet, things would be much, much worse if we didn't have emotion. It also allows the Gods to appeal to our moral, ethical and compassionate side far more than if we didn't have it.

Let's start with an example from my own life, so that the reader may better understand this universal truth. I have a very cute cat named Rosie, who we adopted from a local animal shelter a year or so ago. She is a valuable asset to our family at times, but she also has her many problems. The trouble she gets into will sometimes make me incredibly angry to the point that I want to get rid of her, but here's the thing, I can't. No matter how much I want to pick her up and toss her out my door, my emotions create empathy and love, and make me realize that such an action is not only cruel, but very wrong and dishonorable. More so, the Gods are able to appeal that ethical side to me because of the fact that they enabled me with the emotional capacity for empathy and compassion. If I had no emotion, I could do whatever I wanted to other living creatures and indeed the world around me. No matter what the Gods or humans told me, I would be unable to feel or understand it, and that would be a recipe for disaster.

The same goes for other people. The reason we don't abandon our children, spouses or loved ones is because our emotional states will not allow it. Our ability to love and feel keeps us moral and honorable. If we didn't have that capacity, our species would de-evolve into extinction. The Gods gave it to us because it was necessary for our survival and the prosperity of everything around us. And if we encounter someone who fails to show emotion, such as a sociopath, we consider them to be mentally ill, not a natural production.

Realizing this about ourselves is crucial to beginning to understand the genius of the Gods and the intelligence behind our natural existence.