Why Hellenismos? A Look From The Inside 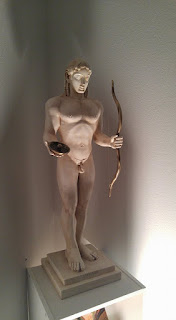 Many people know the amazing story about how I officially converted to Hellenic Polytheism, and my notable experiences throughout the years, but if I were to put those aside and focus on why I find Hellenism the most appealing in everyday life, what would I say? Why Hellenismos? Why have I chosen this religion for the rest of my life? What makes it so compelling? What does it all mean to me personally?

Well, before I start answering these questions, I think it's first important to consider the specific path of Greek religion I follow, Hellenismos, which is the Reconstructionist/Traditional denomination. The reason this is important is because, one, I wasn't always of that persuasion. I spent many years as a Hellenic Neo-Pagan. And two, the core of Hellenismos plays a significant role in why I choose the religion for my life.

For some Neo-Pagans, the idea of a Reconstructionist religion makes them cringe with nightmares of rigidness and dogma, things that some Pagans left monotheism to escape. However, one of the greatest appeals for me in Hellenismos is actually the LACK of dogma and rigidness. For starters, we don't really have a "correct belief system." We are, of course, united by our belief in the Greek Gods and ancient Greek theology, but no one is mandated to adhere to a certain group of myths or the beliefs of a few ancient individuals. It's perfectly legitimate for a Reconstructionist to have their own personal views on things, even when it comes to theology. Reconstructionists are more so united by a certain method of practice, that being the practices of the ancient Greeks. We simply believe that the ancient Greeks best knew how to connect with the ancient Greek Gods, and therefore, we continue their practices, prayers, invocations and ceremonies, not because we want to role play or reenact, but because it makes us feel the most spiritual, and the Gods still speak to us on an individual level. There is a solid backbone in the religion that gives my own life a feeling of structure and foundation. I hate feeling as if I am "going with the wind" so to speak. I love knowing what is before me in my life. I don't enjoy the burden of having to create something brand new every time I want to be religious. Instead, I know much of how to practice my religion already, and I can work on perfecting those practices the more I do them. I never feel alone in any way with Hellenismos. We have a wonderful community and methods, and the teachings of the ancient Greeks are always there to give us continued light and inspiration in our modern movement.


I also very much enjoy the world heritage of the religion. Especially if you live in the Western World and the United States, it's nearly impossible to not see the heritage of ancient Greece everywhere you go, and in mostly everything you do. While so many people refuse to acknowledge said facts, we participate in ancient Greek life every time we vote, elect leaders, debate, hold courts with judges and juries, do math and science, and use a free market to name a mere few. It's actually quite difficult to find something in the West that cannot be traced back to the ancient Greeks in origin. Anyone who tells you that ancient Greece holds no significance to our nation, is either ignorant, or they're hoping you are. Therefore, it's always nice to feel like you're part of something greater than yourself.

The rest is a little more difficult to put into words. It's like trying to describe a feeling that presently has no known title. The immense peace and intrigue that the Greek Gods and ancient Greece give me is intense. Even during my greatest mental breakdowns, when I'm lashing out or about the explode, coming back to the Gods restrains me at least enough to bring me back to a sane state. I don't even have to actively worship to feel it. Just thinking on the Gods and their ancient culture is enough to bring the peace and wonder. It gives me an enormous sense of being grounded and safe in the embrace of a cosmic goodness.

These are a few of the reasons I choose Hellenismos.

I want to be as close to the ancient Greek ways as possible. However, I've been reciting my own hymns and prayers and I'm wondering if this is okay in a Reconstructionist religion.

Of course it is. It is perfectly legitimate in Hellenismos to write your own prayers and hymns.