Learning From The Greek Heroes: Bellerophon 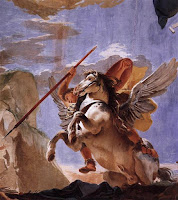 Bellerophon is one of my Patron Heroes, and enjoys a handsome adoration in some of my daily rites. His name is also pronounced Bellerophontes and means "Wielder of Missiles," probably referring to His attacks on the Chimera monster, which begs the question, what was His real name before the battle of the beast? Some say it was Hipponous, which means "Horse-Minded." But the thing is, there are other people in Greek religion with the same name, so it could have been a John Doe title for those who were nameless. We may never actually know Bellerophon's real name, but that's fine because His latter is a great one.

Bellerophon's story begins with a tragedy, but also one that gave Him Heroism. After being found guilty of manslaughter (accidental killing of another human being), He was banished from the land until He could seek and achieve purification from the offense, murder being considered a high pollutant. When He came into the presence of the king who could grant Him the release, the king's wife fell in love with the Hero who refused her advances for reasons of honor. Being angered at this, she falsely accused Bellerophon of trying to rape her. The king, believing his wife over a stranger, sent Bellerophon to another leader with a note to have Him sent to fight the Chimera. The former king didn't want to kill a guest for fear of pollution upon his own house, so He sent the Hero to meet a bloody end at the hands of the fire-breathing monster that was ravaging the countryside. But the Gods were on His side. After Athene showed Him how to harness and use the winged horse of the Gods (Pegasos), He flew overhead where the Chimera couldn't reach Him. When the right moment presented itself, He ran His lance or spear down the creature's throat and killed it. He returned an exonerated Hero.

Bellerophon is the Patron of men who are falsely accused of sexual misconduct, and can be prayed to for help against overwhelming challenges, enemies, and evil and negativity in general. His alleged tomb still stands today in modern Turkey. ( Tomb of Bellerophon )

What can we learn from Bellerophon? First, honor is of the highest importance. If you don't have your honor, you don't have anything. No one will trust or admire a dishonorable individual. He also teaches us to never be scared of the challenges or monsters that face us. We can, through the favor of the Gods, overcome anything if we are willing to fight and never give up. Any hurdle or obstacle can be flown over.