Can A Hellenist Use Runes? 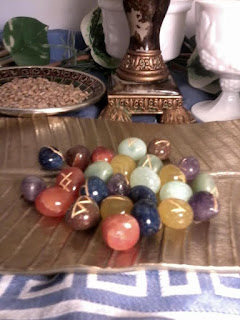 There are many forms of divination that people use to communicate with their Gods, Spirits, Heroes and other Divinities and the question surrounding the use of runes for the Hellene obviously comes from the fact that they originate in another culture. However, as we all know, the ancient Greeks sometimes adopted things from other cultures, so in this post, I will give my opinion on the question, Can a Hellenist use runes in their religious practices?

The short answer would be, I don't see why not. Runes, while they come from another culture, are very basic and general forms of divination. The meanings on the stones are extremely general. They mean things like humanity, wisdom, prosperity, victory, inheritance, etc. None of these things would be something not found in Hellenic culture, nor anything that would contradict Hellenism in and of themselves. Unless someone can find a credible source which says that divination through stones or rocks was strictly forbidden in ancient Greece, I don't see any logical or reasonable argument against the practice. It's just as much a general form of divination as anything else, such as tarot, palmistry, bibliomancy, aeromancy, etc. I see no problem, especially if the rune set is Hellenized. For example, I sometimes use the tarot for divination, but it's The Olympus Tarot, which is a completely Hellenized version of the deck. I'm not sure how you'd find a Hellenized rune set, but in the event that you could, that would make it even more appropriate of course. In fact, I find that some runes just as they are have similar markings compared to the Greek alphabet, and some historians argue that the Greek system of lettering might have been the inspiration for those who originally created the rune system.

We live in such a diverse world today where our knowledge of things has greatly expanded, and therefore I don't think it's wrong to adopt things into Hellenism within reason. By within reason, I mean things that would not contradict or have conflict with Hellenic theology, piety and worldview, of which there are many out there in my view.

I would think that the Greek Alphabet Oracle might come close?

And now I'm off to look for the Olympus Tarot. I have (and love) the Mythic Deck.

Anyone who claims a person cannot use the runes due to religious reasons and exclusivity is a fool.

The historicity of runic use for divination is largely a modern construct, anyway. There are only *assumed* uses of runes in pre-Christianized Germanic lore for magical workings. Even then it was probably because of the use of the written word in incantations and whatnot, much in the same way that the Latin or Greek alphabets are used for various magical workings. it doesn't make them inherently "magic".

And nothing about it being used for divination. 'Germania', which is the first line of defense for the 'historic use' of the runes predates the creation of the runic alphabet by nearly a century. Beyond being a problematic account on its own, that is.

It can be a challenging deck to use. You not only have to read the actual signs of the cards, but also interpret the pictures from Greek Mythology on them. It's fun once you get the hang of it.

I have to admit, you made me laugh with your first sentence, in a good way. I agree, someone who makes that argument is really deranged.