Labrys & Horns: Review of An Introduction to Modern Minoan Paganism 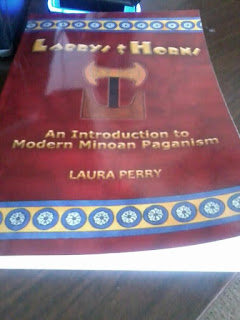 Over this weekend, I received a copy of a book that I was hoping would extend my knowledge of ancient Minoan religion, since they are considered a predecessor to ancient Hellas. However, I was disappointed to read a number of entries where the author, Laura Perry, takes liberties with bashing the ancient Greeks and the ancient Greek religion. While her discussion of Minoan religion itself is quite informative and interesting, her allegations and assumptions against the Greeks are simply inaccurate and dishonest, so I wish to take this time to review these parts of her book and address them each individually.

I first want to point out that Perry gives no sources in her book. While she lists suggestive readings, these are not the same. The reason for that is obvious, we know virtually nothing concrete about the Minoans. You can't have sources on something which no one knows anything about. Therefore, in many cases, her book reads like an opinion piece, not something that is historically scholarly.

Page 8, "Classical revivals during the Renaissance and again during Victorian times, have helped to popularize the incorrect notion that western civilization began in classical Greece."

Now for historians, there is no denying that the Minoans and their culture moved onto the Greek mainland and inspired the Greeks there. I think, in my opinion, it's fairly obvious that Deities such as the Dove Goddess and the Mistress of Animals later became Aphrodite and Artemis. In fact, the Greeks were no strangers to borrowing things from other cultures. However, they did not borrow anything that didn't fit into the Greek worldview, and therefore, what they adopted was already Greek in the first place. What we know in terms of western civilization today has most certainly came from the Greeks. With Minoan excavations, it's quite obvious that they were different. As Perry says on page 6, "the Minoans weren't the same as Indo-European Greeks - they were a separate, unique people." If they were separate and unique from the Greeks, this means that the two cultures are not comparatively the same, and we must therefore conclude that the ancient Greece we know of had much of its own unique design. The Greeks also perfected things they borrowed into their own culture, and those perfections, as well as the originality of ancient Greece, has in fact given birth to western civilization.

Page 32, "But Theseus didn't exist in Minoan times. He's a Greek culture hero, invented centuries after the collapse of the Minoan civilization, to 'advertise' the Greeks as modern and advanced compared to the 'primitive' Minoans."

I must ask, where is her irrefutable evidence that Theseus was invented and didn't actually exist? Other than her own beliefs, where is the evidence? There is none. But we do have people and even historians who talked about Theseus, Plutarch being among them. So we do have reasonable speculation that such a man was real. As far as Theseus symbolizing an advance from primitive to modern, that may very well be the case. We know based on reasonable historical and archaeological speculation, that the Minoans were known for times of practicing human sacrifice. While probably not commonplace, it likely did exist. Humans being thrown to the Minotaur and killed in order to appease Minos, whether for a divinity or a king, is human sacrifice. When Theseus killed the Minotaur, He literally put an end to such barbaric religious practices and brought the Greek land into a more civilized state. It's also important to remember that Theseus was said to have existed in a time after the collapse of the heyday of the Minoan civilization. Theseus is said to have lived in the 1200s BCE. The Minoan civilization collapsed in 1450 BCE, and therefore, the Minos Theseus knew could not have been any person directly of the Minoan civilization that Perry's book talks about. He may have been trying to bring back the old culture of the Minoans, parts of which the Greeks did not like, among that being the continuance of human sacrifice, and the Greeks stopped it.

Page 40, "This bull imagery carried down into later times when the Greeks portrayed Dionysus with bull horns. This may also link Dionysus with the Minotaur (see below) and other bull symbology from ancient Crete."

Debatable. The bull is a strong symbol of fertility, and Dionysus is also such a powerful God of that attribute. It may have had nothing to do with an originality from Minoan culture.

Page 60 on Minos, "Here's a tricky fellow, an ancient Minoan god who was demoted to a mortal king by the Greeks."

Again, I would ask for a source on this. We must also consider the fact that, if the original Minos was a deity as Perry argues, it was not uncommon in ancient times for kings to be named after gods. So it's more than reasonably possible that a mortal king of Crete took the name of the god. Some have also suggested that there was more than one king named Minos, which would give more weight to the theory that the name was either adopted, or more of a dynastic title. As I mentioned in the address to the quote on page 32, the king Minos of the time of Theseus came after the collapse of the Minoan civilization. So it's more than possible that the king Theseus fought adopted the Minos name if it's indeed that of a deity in his mission to restore the old religion, as the king was not any part of the actual civilization that preceded him. He was merely a continuance, perhaps someone trying to revive the old culture. Furthermore, the ancient Minoans did not even call themselves Minoan. I don't think we know what they called themselves at all. They were given that name by Sir Evans who unearthed the ruins of their civilization. He chose the name based on the mythical king known to Theseus.

Page 78,  "The difference in the position of the goddesses in these myths - Ariadne and Rhea as independent characters versus Demeter and Persephone being manipulated by men - shows just how different the position of women was in Minoan versus Greek Society."

One thing I have typically noticed about authors like Perry, is that they bash male Gods based on their myths concerning sexuality and dominance, yet never say anything about the female Gods or Divine Beings. They never say anything about Aphrodite's many affairs, or about Her allegedly starting the Trojan War with Her sexual authority. The Goddess of Love is not monogamous at all. She's powerful and She knows it, and She can use that power to get what She wants. Not even Gods can resist Her. She's sexually dominant in so many ways, yet a male God who is sexually dominant, for some reason, gets a bad label. Not all of the myths concerning Persephone even say She was abducted or required to be wed. Some say She willingly accepted Haides as Her husband, although Perry chooses the version that gives strength to her worldview. In my opinion, Perry doesn't seek to give a fair and balanced view of sexual and genderized myth and culture, but simply an anti-male slant. Neither male or female power is bad, both are good and amazing. There is no need, and is in fact ridiculous and childish, to hate or vilify one or the other.

Also, I think it's important that we don't judge the Gods by all of their myths. Not only are there many that vary from Greek culture to Greek culture and sometimes contradict, but the Greeks themselves also eventually didn't see their myths as literal facts, yet still firmly believed in their Gods as good and just Beings, and that's how we should see them as well. We should abandon any myth or story that tries to convince us otherwise. The ancient Greek society was also not universally misogynistic. Each city-state had its own laws and religious practices. Women in Sparta, for example, had more power and rights than women in Athens. Spartan women were highly revered, and were even known to exert control in their marriages. The Oracle of Delphi, considered to be the highest mortal teller and seer in the ancient Greek world, was a woman. Greeks also believed that Hera rivaled Zeus in power. She wasn't His chained dog, but His fierce partner. In fact, Homer refers to Her as "no less than Zeus who delights in thunder." So to argue that women and Goddesses had no prominence or power in ancient Greek culture, is beyond the realm of the ridiculous.

I'd additionally like to point out that, contrary to many modern assertions, there was never in human history a matriarchal culture. While there were cultures where women were leaders, or had more rights, freedoms and values than in others, their culture was still male dominated.

I just think that Perry doesn't address all the facts, yet clearly seeks to bash the ancient Greek culture. I emailed and invited her to have a friendly public discussion and debate with me, but she declined.
at February 25, 2017