Can Anyone Be A Greek Hero?

This is a question I have thought on quite a lot. The Greek Heroes, who can now be prayed to for help and connection with the Gods, once lived with mortals and were at least half mortal themselves. However, being part divine was not something that was essential in order to achieve Hero status.

"Divine parentage is not a necessary precondition, however much the sons of gods are regarded as heroes. Even a criminal who has met with a spectacular end may become a hero, and an enemy of the state may become its champion and protector after his death" (Burkert, 207). 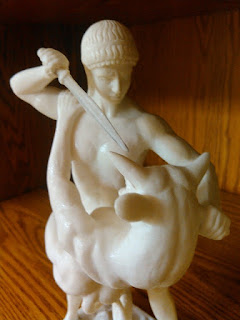 So, in accordance with historical Greek religion, and my own personal belief and opinion on the matter, yes, anyone can become a Greek Hero. But this presents an even deeper, more detailed question. How does one reach this and under what conditions and attributes would one exist in this after their death? This, to my mind, is the more ultimate question that we can examine here, but perhaps never fully grasp as mortals.

I would first begin by saying that, in order to reach Hero status, one must naturally do things or at least one thing, heroic in their life, perhaps in accordance with ancient Greek standards as well. Fortunately, these standards can expand easily into our own time and world, such as overcoming great challenges, saving lives, defeating great enemies, and/or bringing positive revolutionary change(s). In short, anything that lifts us above what the general population is unable or not willing to do themselves. Those such as Theseus, Bellerophon, Jason, they all fell into these categories.

However, I think it's also important to remember that these categories can take on way more than a singular form. In other words, one doesn't have to save lives by beating a Minotaur. They can save lives by rescuing people from danger or giving aid to a homeless, sick or destitute person who might otherwise perish. They can overcome their own great challenges that have been placed before them, and they can cause great change by doing good things for their society, state, country and/or world. It is one's abilities, courage, willingness and drive to do what is right that creates a Hero. And all or any of those great things achieved, will be what the Hero is called on for my mortals. What the Hero does best, or what they wish to be recognized for, is what they continue to do. So, if someone rescues a person from a burning building, firefighters might pray to them for assistance in that pursuit, or people may pray to them for protection from fires. If someone defends a child or woman from abuse, they might later be prayed to for protection for children and women against aggressors. If one drafts legislation to bring, for example, freedom and equality for an oppressed people, and they get their government to pass it, people could pray to them for assistance in liberating those in any kind of unjust societal bondage. Or, if someone simply has a great enough challenge themselves to overcome and they conquer it, people could pray to them for victory in the same or similar challenges.

I think it's also great to remember, as Walter Burkert points out and as I have believed for a long time, that we can always change and become better than we were the previous days. In Hellenism, we can decide to be better and achieve greatness, despite our past. Someone could go their entire lives being nothing or being less than admirable, and still have the ability to reach for greatness should they choose. We always have the ability to do better. We can even become a Hero.


In Memory of Walter Burkert.