Theseus: Biography of an American Father 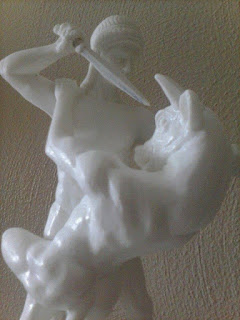 I know what you're probably saying right now. Theseus a Founding Father of the United States? Well, yes. Since some Christians think they can proclaim Moses to be a Founding Father because of Judeo-Christian influences, we also cannot forget to equally recognize Theseus and ancient Greece Herself, perhaps more so than biblical.

The first reason is probably the most obvious. Theseus was the Founder of the first democracy of Athens, which has since inspired free governments all over the world, including our own. It's the reason our courthouses and government buildings often resemble ancient Greek temples. Recognizing the first democracy must also recognize its first Founder.

Secondly, while Theseus was a monarch, He didn't act like it. When He killed the Minotaur, He liberated the mainland of Athens from the tyranny of an island oppressor. I wonder which other nation in history won its independence fighting a tyrant on an island across the sea?

Thirdly, one of my favorite cases, involves the wonderful pluralism that resided in the mind of Theseus. When Theseus brought the lands of Attica together into the Athenian State, thus creating Union like our own, he opened the doors of immigration. In other words, even foreigners could become citizens of the City, and this no doubt contributed to the flourishing and strength of Athens that grew there. Our country is very similar. Anyone can become an American if they have the right character and mindset, and as Ronald Reagan once said, our strength lies in our pluralism. Theseus is the Father of a pluralistic, diverse and free society.

Theseus, no doubt, would have loved America. If you dressed Him in a revolutionary uniform and dropped Him in 1776, no one would blink. He deserves to have His face in the House of Representatives along with the other historical figures, and recognized as a Father of America.

Anyone interested in learning more about the truth of Theseus' life can purchase my book on Him by clicking here: Theseus: His Life, Mysteries and Virtues