Choosing A Hero In Your Hellenic Practice 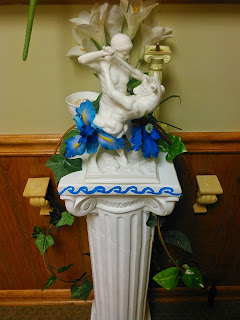 There is certainly no lacking of Heroes in the ancient Greek religion, although some are certainly focused on more than others. For example, in no particular order, Theseus, Bellerophon, Herakles and Jason are probably at the top of the list among the most popular. When people ask me, I do say that Heroes are a valuable part of Greek religion, and certainly not absent from my own practice, even though I usually direct my focus to one particularly, and that concept is the topic of this post; choosing a Hero in your Greek religious practice and life. But first, let's talk about some of the functions of Heroes in Greek spirituality.

The Heroes once lived among mortals in the flesh, and aided them with their services and feats. For example, Theseus saved an entire civilization when He defeated the Minotaur and defied the power of Minos. And Heroes such as Theseus were part mortal as well, although it is not impossible in Greek religion for a full mortal to obtain Hero status. In Hellenic belief, the Heroes are between the Gods and mankind, and can therefore act as a connection between the two, as Walter Burkert explains in his famous historical and scholarly work "Greek Religion." Now, of course, the Gods can be reached by mortals as well. We are not cut off from our Gods. In fact, they exist everywhere, all around us, and enjoy taking part in our lives. But a Hero has the potential to gain more attention from the Gods on one's behalf simply because of how they exist in between. Think of it as an ascension to the first level of divinity and then progressing to the top, as you send your prayers. Obviously, we can't ascend to the Gods in mortal bodies, but the Heroes are in spiritual and divine form, and therefore, they can. For example, when I pray to Theseus, I ask Him to speak to the Gods in favor of my family and I. So one of their functions is to assist that connection. But one can also pray to a Hero for connection to a single God or Goddess as well. For example, I may ask Theseus to send my prayers to Hephaistos for fruitfulness in my labors.

Of course, Heroes not only exist to help us connect with the Gods, but also to aid us in our lives themselves, which is why I pray to Theseus for victory in my daily battles and to help me overcome all that seeks to oppress me. Heroes can also be prayed to in order to dispel negativity or a negative presence, especially in the case of someone like Theseus whose crowning achievement was the defeat of a great monster. In short, a Hero can bring the presence of goodness, positiveness and light to an otherwise bad, negative and dark situation. On a side note, it should be recorded that one does not have to specifically be a Hellenist in order to have a connection with a Greek Hero. In other words, you can be a different religion. For example, I've known general Pagans and Wiccans who pray to Greek Gods. I see no reason why they could not also pray to Heroes.

Choosing A Hero
Choosing a Hero to focus on, if you wish to practice with such a focus, is not one that is complicated or difficult. The first thing one can do is to research and find which Hero they admire and/or feel connected to the most. However, don't focus so much on their myths as you do on their qualities, attributes and crowning achievements. People of extraordinary status tend to pick up myths, rumors and legends in their stories along the way. For example, there are many that accompany Theseus. But Plutarch can't even tell us how Theseus got His name. Once you have decided, pray and offer to that Hero and see the response you receive. Eventually, you will find which Hero you are connected to the most. Once you do, write out your own common prayer to them. This is the one you will recite the most in general prayer, to bring the Hero into your life and attain their presence. A continuous prayer and/or hymn of your own will give you a personal, unique connection, and the Hero may even recognize you only and specifically in that particular recitation.

Once you have reached these levels, where you are certain of who your Hero is, build them a shrine/altar. Place upon it representations of them and let that be a central place for them in your practice. In the picture above, you can see my shrine and small sanctuary to Theseus. It doesn't have to be as elaborate as mine, it can be a simple design. However, over time, you will no doubt come across more decorations and additions to place on it, which is great. Lastly, create a personal ritual that you use consistently when praying at your Hero shrine. As with all of your personal and private rituals, keep them secret, only practiced by you, so that the Gods and Heroes will recognize you specifically through them. I know that I sometimes give details as to some of my personal practices, but for the most part, I keep them secluded within the walls of my family's shrines and sanctuaries.