A Disturbing Trend of Monotheism 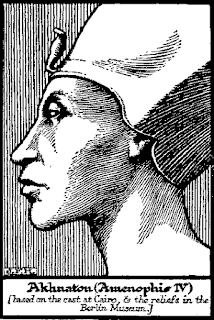 The first Monotheist on human record is Akhenaten, an infamous Egyptian pharaoh who ruled the 18th Dynasty. He turned ancient Egyptian religion on its ears when he abolished the Polytheistic system by force, and turned the god Aten into a radical Monotheistic Cult, mostly centered around the adoration of Akhenaten himself. By the force of the state, everyone turned Monotheist during his reign, only being allowed to worship the one god Aten. Once the king died, the traditional religion of Egypt was reinstated. Not only that, but the Egyptians did everything they could to remove him from their history, including destroying his statues and erasing all records of his reign. Clearly, he was hated and considered a shame upon his culture. Interestingly, the religion he founded, called Atenism, is still practiced today by some modern Egyptian worshipers. Of course, modern practitioners of the religion are not of the mind that everyone should believe as they do, or that Polytheism should be abolished. In this way, they immensely differ from their founder. In fact, to my knowledge, Egyptian Polytheistic groups today have no issue being friends with Atenists. This post is not meant to be a stab at modern Atenists at all. It's to examine the history of Monotheistic oppression. Secondly, I simply love writing about religious history.

As Monotheism continued down through the centuries, turning into systems such as Christianity and Islam, this radicalism continued, and still reigns in terror throughout many parts of the human world today. The ancient Greek religion vanished only under the intense pressure of the state government after it was taken over by the Christians. The coming of Monotheism to the Greek lands saw the old religion outlawed, temples closed and followers murdered, tortured and coerced. This line of persecution really got its rabbit start under the Roman Emperor Theodosius I. Modern Christian historians would have you believe that it was the Pagans who persecuted the Christians mostly, and while certainly this happened, it's not the grand scale that is implied. The 313 CE Edict of Milan gave freedom of religion to everyone in the Roman Empire, including Christianity. There would no longer be any laws prohibiting it from existing. The problem was that the Christians didn't want simple religious freedom. They wanted religious superiority. The idea of Jesus being recognized alongside all the other Gods instead of above them, was not something the Christians were willing to accept. They could not stand the fact that they didn't have control of all things. When the Christian emperor Theodosius I later came along from 379 to 395 CE, the genocide of the Pagan cultures was fully implemented.

In our modern time, there are still leaders, elected officials and governments, even in our own country, who try to use legislative power to enforce Christian belief on their entire population. Islam also sees the mass persecution of entire nations in places like the Middle East where it's illegal to be any other religion but Muslim. Dissenters in these countries are routinely jailed, banished or executed. Extremely radical Monotheists like the Islamic State, a terrorist organization, also routinely smash ancient Pagan religious relics, using force to remove them from the human consciousness and awareness. And I don't want to actually put separation between the Islamic State and said Islamic governments, because when you get to the core, they're all terrorist organizations. It's just that one has a UN license to persecute and murder, and the other doesn't.

Of course, this is not to say that every Christian or every Muslim believes in persecution. Indeed, there are many who love freedom just as much as anyone else, and it's always important to judge people as individuals, not groups. Judging people by groups has also led to unspeakable acts against the innocent. I think of good humanitarians like Barack Obama, who is Christian and supports religious freedom for all faiths. But historically speaking, Monotheism itself has been, and is being, used on massive levels of persecution and crimes against humanity.

The larger picture here is a continuous trend in Monotheism. Since its inception as far back as Akhenaten, it has had to be implemented by force. When the Egyptians were free to choose their religion again, they returned to Polytheism. When freedom of religion finally found its way back into Greece after centuries of persecution, Polytheism began to regrow. In the Free World itself today, Pagan and Polytheistic religion and spirituality is rapidly growing and thriving. When freedom of religion is allowed to flourish, Polytheism reclaims the land and the people. Monotheism has always been given by force of sword and blood, and in my view, it always will have to be if it is to remain, because the natural structure of the human theological mind is geared toward Polytheism. It is literally our natural state, which is why it has always taken force and fear to silence and change it.

Why, one might ask, has Monotheism been so inherently tyrannical? The answer is simple. When you believe there is only one way to live and believe correctly, and that you yourself have that way, you cannot leave any room for those who disagree or want to live differently, lest you be forced to question the validity of your own notions. If Monotheism had allowed freedom of religion, it would have had no grounds to proclaim itself as the one true way that everyone should follow, and it would therefore lose its power and control over the masses. While on the other hand, Polytheism does not need force to exist.

Here in America, we don't believe in telling anyone that they can't practice the religion they want. Monotheists should always have the same rights as everyone else. But there should never be any mistake that the same rights belong to others as well. If we do not learn from history, and beware of its lessons, we may be doomed to take the classes over again. As James Madison said, the purpose of the separation between church and state is to not repeat Europe's bloody past. I certainly do believe that Monotheists have the right to their religion. Freedom of religion is a human right, it is NOT negotiable. But I also think that the Pagans and Polytheists should have some their rightful things returned to them, and be able to live freely anywhere in the world without fear of being harmed because they choose to believe in the old Gods.