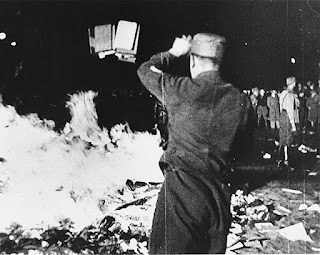 By now we've all seen the public display of Nazi Germany that took place in Tennessee, climaxing with a Christian bonfire of books that were deemed dangerous, or whatever their half baked logic was. As an historian, such antics are nothing new to my eyes. I think I'm safe to say that the first Christian book burning went all the way back to Paul, who burned ancient Greek and Jewish texts in Ephesus, and was run out of the City. A difference of opinion, belief or worldview has always been enough to send fascists into a craze, and nowadays, it seems that something as frail as a fictional novel can offend them enough to resort to political violence and destruction.

If they want to waste their money buying books only to burn them, then that's their free speech right, however dumb it may be. I call it a fiasco because it was a complete failure. We no longer live in the days when books could be erased from human eyes. We have publishers and computers now. All the former has to do is push the print button and a new one will come out. They could take a thousand of my own publications and burn them. I will not care, because I still get paid for those thousand copies, and my publishing site can make new ones as soon as the next week. So not only did these radicals do nothing but waste their time, they tarnished their reputation among free people.

What worries me most is that this kind of mentality seems to have a significant presence in America these days, mainly among the conservative states. While it's possible these people may just be doing it to get attention and create shock value, I grew up and came from a highly conservative area in North Carolina. It got so bad by 2013 that the state government tried to pass a bill declaring North Carolina to be a Christian State and exempt from federal law. Fortunately it failed by the hands of the House Speaker at the time, Thom Tillis. But I know there is hostility toward the idea of a free people, that's one reason I got my family and I out of North Carolina and to a free state. Equally regrettable, it does no good to tell these people they are fascist because they already know. They think it's a good thing. They believe that there is a justified persecution.

America has always had people who hate freedom. There were radical Christians in the colonial days who opposed the Constitution because of the first amendment. Whereas America is a land where many different ideas and beliefs can freely circulate among whoever may decide to willingly to hold them. So the good news is that there have always been more Americans who believe in freedom, so what can we do about the freedom haters? Vote. Quite simply, vote every time there is an election, no matter the office. We defeat fascism by closing the government to it. We cannot force people to change their minds, but we can make sure they never gain power.