Everyday Environmentalism For The Pagan 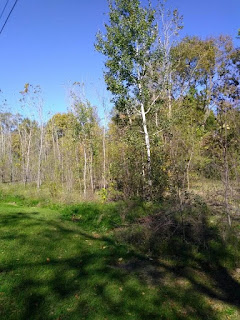 As Pagans, and lovers of Nature, we all care about the environment and the Natural World around us, so it's no wonder that many of us consider ourselves strong environmentalists. However, one problem is that the world is a big place, and it's easy for us to find ourselves overwhelmed. But in ancient Greek times, each person, citizen or priest was responsible for their specific precinct, city, sanctuary or temple alone. One person couldn't run the whole Greek land, but with each person doing their part in each little section, the whole land vibrated. I have incorporated this idea into my own personal environmentalist efforts, and I encourage all other Hellenes and Pagans to do the same. Take a look at the picture on the right. This is a very small section of forest behind my home that I decided to sponsor, if you will, and I take regular trips through it to make sure the forest floor and trees are clean. 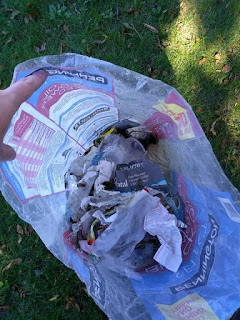 On the outside, a forest like this may look presentable and fresh, but you would not believe the amount of trash I pulled from it just today. Look at the picture on the left. And by the way, that big plastic bag I used to hold all the trash was also found in the forest. The forest has two major issues that it has to deal with. One is, of course, careless humans, and the other is the fact that it stands next to a public dumpster, so there's the possibility that trash could accidentally blow through it and land in various places.

Upon noticing the area being in need, I walked out there and worked as long as it took, releasing much sweat and pain, but eventually I recovered the landscape, and at the end, I praised Artemis and declared my labor as an offering to Her and the woodlands and forests She loves so much. I don't consider just stone and brick structures to be temples of the Gods, but also the woods, rivers, fields, and so on. These things over which the Gods rule are also their temples and sanctuaries, and that's why I, and all Pagans and Hellenes, should work to keep them clean, safe and protected. It took only about 30 minutes of my time, and it didn't require superhuman abilities or machines. Yet, I still cleaned up this entire section of forest all by myself using only my hands, a large bag, and devotion in my heart. I hope all of us will find the same in ourselves for the world around us.

When you have accomplished the work, you will feel amazingly good about yourself. You might even come to discover wonderful natural places that you never knew existed around you. It may also even give you a great sense of pride and belonging in your community. I know when you're laboring, it gets frustrating to think of the fact that you wouldn't have to be out there if people weren't so stupid, and that you will probably have to go out there again in the future because of them. But pray for those people, and be a good example and role model for them. The world is full of followers, not leaders. We need more of the latter.

Note that when deciding to sponsor a piece of natural land that is not specifically your own, make sure that you have permission to be on it. If the land is owned by a private person or company, just ask. Most people probably wouldn't mind giving you permission to clean it up for them.