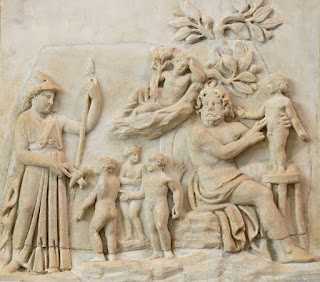 Many stories of creation fill the religious books of humanity, but none quite as well known as those of the Jewish and Christian religions. The Judeo-Christian story says that God created man from the dusts of the earth. Some may interpret this as saying that humans were created from the surface, and that is correct. Many things in our bodies can be found above the ground. However, the ancient Greek version of creation is more accurate, and so many people in our time don't even realize it.

According to at least one of the ancient Greek creation stories, Prometheus made man from mud. Now this is still the surface of the ground, but it adds a key element that the Jews and Christians forgot; water. Most of our body is composed of water. When you add water to dust or dirt, what do you get? You get mud. Therefore, the ancient Greek version of creation is the more accurate.

I really can't believe I lived this long as a Hellenist without realizing such a fact in the mythologies. I bet there are even others in my religion who have never come to it, but as a deep-thinking Mythologist, I suppose it was only inevitable that it eventually occurred to my mind. Ancient Greek religion, belief and myth is so elaborate that one could endlessly think of interpretations and rationalizations with them. I think it's time people started realizing that the ancient Greeks were brilliant in religion and theology as well as everything else. To conclude that they were advanced and intelligent geniuses in everything but religion, is just silly.