I Met The Black Ranger Yesterday!

I was around 9 when the original Power Rangers first aired in 1993, becoming one of the most popular tv shows in superhero history. I was among their biggest fans. Like all young men, I wanted to be the male rangers and date the females, especially Kimberly, the pink ranger. In fact, I remained a fan of Power Rangers until Lost Galaxy, and after that, the series just got boring or silly. I didn't really like Turbo either, and apparently, neither did a lot of other people. I mean, an Astro van and go-karts? Really? The original rangers always remained the best. When they made the new movie this year, of all the seasons they could have picked, they went with the first original theme and story, because everyone knows the originals are the real Power Rangers; loved by all fans. And trust me, that admiration has not died. 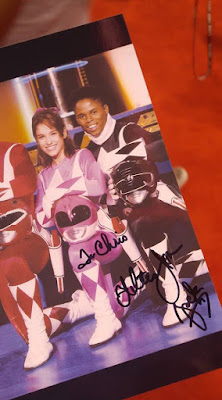 I went to Chicago this past weekend with my wife on vacation for our 8th year anniversary, remembering the day we first met each other back on May 8th, 2009. Upon her suggestion, we went to the C2E2 event that was happening at the McCormick Place, which is basically like a Comic-Con. My area of interest in attending was the fact that three of the original Power Rangers were going to be there, those being Walter Jones (Zack, the black ranger), David Yost (Billy, the blue ranger), and Jason David Frank (the green, white, and later the red Zeo and Turbo ranger).

The original rangers were my childhood heroes, and anytime I could get my hands on their toys or videos, I grabbed and growled. However, I never thought I'd meet any of them in real life, but around 25 years later, that changed at the C2E2 event. I could only meet one, and I didn't know which I wanted. So I picked the shortest line at the time, which happened to be Walter's, although that line grew very rapidly. I shook his hand with one of the biggest smiles I had ever made, and said, "I watched you when I was this tall," showing how little I used to be. He smiled, "I think you've outgrown me just a little bit." He signed an autograph for me that featured him with the other rangers in uniform, and then we had our picture taken together with the black power morpher. I really loved that thing. It almost felt like iron. You really felt like you were holding the morpher that would turn you into a ranger. Afterwards, I shook his hand one last time and said thank you.

At first, I wasn't going to stand in line to meet him. I had been there for a while and was tired. I didn't feel like waiting, but then I realized that I had wanted to meet the rangers 25 years ago, and if I didn't do it now, I may never get another chance. So I decided to finally fulfill my childhood dream after so long. It was certainly something I will always remember, and will always keep framed above my desk.