How Do I Begin Practicing Hellenism? Beginner's Course

In the past, I have written about practices for beginners of Hellenism, as some people who are new to the religion have absolutely no idea how to even begin the practice because of the lack of information. When it comes to a mainstream religion, information on it is extremely abundant. With a mere click of a mouse or a quick trip to the library or bookstore, one can uncover centuries of detailed information. But as for a minority religion, there is little to none, especially when you consider the religion of ancient Greece because so much of the history has been lost, misrepresented or remains hidden. So, in the post, I will lead the beginner through basic steps to begin their journey into Hellenism.

One good thing about Hellenism is that it does not require a special rite or passage, unless of course you are part of a specific organization or temple who might have their own methods of initiation. But generally speaking, there is no such thing. You merely have to decide that you want to worship the Greek Gods in accordance with Hellenism, which I assume you already have if you are reading and considering this entry.

Shrine and Altar
The first step in Hellenic worship is to establish a place for such activity. To begin this section, one should take into account the difference between a shrine and an altar. To put it simply, a shrine is a place for divine representations. In other words, statues, pictures, and sacred objects. Consider the shrine to be the house of the image or images of the Gods. The altar, usually being part of the shrine in some way, is where offerings are given and other ritual work carried out. For example, my altar exists to receive offerings for the Gods and to hold the flame of the entire shrine and altar structure itself. 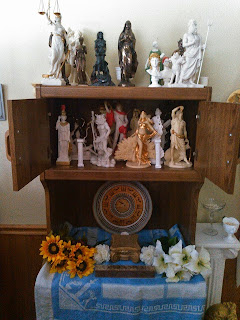 A shrine can be constructed to all the Gods, or to a specific one, which is more of a Henotheistic approach to Hellenism if a singular representation of one God is all that exists in a Hellenist's worship, whereas most of us worship numerous Gods. Some Hellenists may have a specific shrine to Hestia in their home, but another shrine for general Hellenic worship. In constructing a shrine or shrines, it can be easy for a Hellenist to be carried away with the projects. Hellenists are called hard polytheists, and not without good cause, because we are extremely polytheistic people. We believe in numerous Gods, Spirits and Heroes, too many to reasonably list here. Therefore, one could find themselves wanting to built numerous shrines around their home. My wife use to joke that I turned every available space into a shrine, and it was true, I was always looking for ways to build things for the Gods. While this is perfectly fine if that's what you want to do, I found it exhausting to go from one to another, so I made one large structure to hold all of my statues and the altar beneath it, as you can see in the picture above. The central shrine compartment holds a statue of every Olympian, while the top is for Gods without a throne on Olympos, Hestia's statue being in the center of the entire structure because She is first and last in general worship. 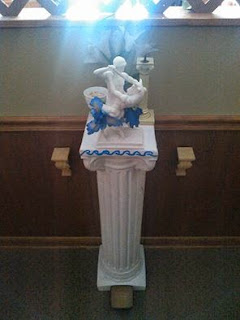 I also have a small shrine/altar to my patron Hero, Theseus, set up as a small sanctuary to Him that you can see on the right as well, which brings me to my final point about shrines and altars. Although they are two separate structures, if one is pressed for space and has to use one surface or structure for both, that's fine, just make sure the areas are specifically designated and not crossed over with each other.

For YOUR shrine set up, assuming that you don't have the money or materials to construct something hugely elaborate yet, start with a simple construction. Of course, it can grow overtime at your own pace, but to begin, I would say start by having a statue or image of an Olympian God or Goddess of your choice. You could also start with an Olympian, along with the Agathos Daimon (the Good Spirit), and a Greek Hero, as this moves to encompass the three levels of worship and prayer; God, Spirit and Hero. Of course, as time goes on, you will likely find yourself adding more things and decorations to your shrine and general worship area. Lastly, keep your shrine clean and protected. It's not a place that should be allowed to gather extreme amounts of dust or dirt, and it's not a place for keys and clothes or for house pets to walk. Keep it sacred.

The use of the altar is for offerings and ritual work. The altar itself will usually consist of a central flame. If you use a flame, make sure it's done safely. Simply put, a flame is the central fire of the ritual. It is a symbol of the Gods, and a place to consume offerings given. Often times, I use a nicely-sized candle that burns tall and hot. Usually, the offerings I throw in are small pieces of barely. One must be careful, however, to reasonably toss the offerings into the flame so you don't get too close and burn your hand. While an altar flame is a nice addition, keep in mind that fire is nothing to play with, so practice safety on every level. Also add an incense burner and a small bowl for libations. For solid offerings, you may want to also include a basic plate.

Once you have completed your shrine and altar construction, you are ready to start practicing Hellenism. However, do not mistake the shrine and altar for being the only window to the Gods. It is but a house or a structure in honor of them. The Gods are everywhere in nature, all around us, and they can be contacted whether you are at your shrine or not. Lastly, before beginning any Hellenic ritual or religious activity, make sure you are properly cleansed. This can be done through a shower or a ritual bath, and put on clean clothes, all white if possible. Now I would be dishonest if I said that I always put on all whites every time I do a prayer or give an offering, because sometimes I don't, but I do wear whites often, as well as at every religious observance, festival and offering on the Hellenic calendar, aka the Calendar of Attica.

First Offering and Libation
Generally speaking, common offerings to the Gods consist of an offering and a libation. The offering itself can be things like incense, food, or valuables, while the libation is a liquid offering, usually being something like juice or wine (if you're 21), or any other libation of good taste. Begin by giving your libation to Hestia, Goddess of the Hearth, while asking Her to be present in your home and help bring you into the presence of the Gods. Now burn your incense or place your offering to the Dodekatheon (Twelve Gods aka the Olympians), with the most going to Zeus the King.

First Prayer
Your first spoken prayer at your first ritual does not have to be an elaborate one that rivals the hymns of Orpheus. You can simply dedicate yourself to the Gods, as in a dedication ceremony of your own. Upon bringing your ritual to a close, thank the Gods for hearing your prayers and accepting your offerings, and pray once more to Hestia, for She is first and last, accompanied by a small offering of some kind. I usually use barely for this.

Suggested Readings for Beginners
In my view, Hellenic religion exists in three forms, those being spiritual, physical and mental, or theology, practice and philosophy. Hellenic culture has given to us some of the most influential philosophy in the history of humanity, and many of those works are available today. I generally focus more on history and philosophy than mythology, because myth does not stand as literal fact or necessarily history. However, I will recommend a good mixture of some philosophical and mythological works here, all of which are easy to obtain. Start off with these readings:

I hope you have found this helpful, and if you have any questions, simply post them in the comment section of this entry and I will respond.

In the Goodness of the Gods,
Chris