Christian Witchcraft Making News: My Thoughts On "Jesus The Magician" 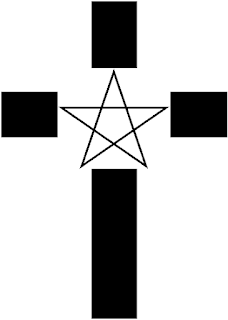 Christian Witches will be holding their first ever convention this year in Salem. I understand that, for some people, mixing Christianity with Witchcraft or Paganism is a starting point, because I myself used to be there. From 2008 or thereabouts, until 2009, I was a Christian Witch or a Christian Magician. Like pretty much every Christian Witch, I believed Jesus was a magic-wielding wizard, and the bible a spell book, even though Jesus never said he was such, and the people who wrote the bible hated Witches and Pagans pretty much every time they turned the page for a new entry. I didn't care, it was how I saw the world at that time. Saint Michael and Azrael were my patron angels, the foremost beings against evil and lost souls, which was something I needed at the time since I lived in my grandmother's old country home that was believed to be haunted. I would cast spells in the name of Mary, Jesus or Yahweh, and I wore a cross with a pentagram in the middle. I was very serious about it, but back in my time, Christian Witches were largely silent around my neck of the woods. Nowadays, their community is starting to gain a foothold.

Mixing Christianity with magic certainly didn't begin with modern Witches. As long as Christians have been coming to the Americas, some indigenous people and populations have combined it with their own customs, some of which included magic and spellcraft. As far as our community today, my thoughts on Christian Witches is that I have no problem with a Witch who is a Christian because they love Jesus. However, I do have a problem with a Witch who is a Christian because they are scared of the devil and hell, which was really the main reason behind my own mixing in the early days of exploring magic and Paganism. Sometimes before I would do magic work, I would say, "Lord Jesus Christ, have mercy on us," just as a precaution against the event that I was "sinning" with my practices. A lot of people keep Christianity intertwined "in case they are wrong," and those kinds of people are neither Christian or a Witch in my view. As long as they're doing it from a place of sincere longing and not simply shivering fear, I'm cool with them. If not, I may ask them why they're doing this to themselves, because there's no way anyone could be happy like that.

For some people, Christianity can be very hard to let go of itself, because it's what you've been taught your whole life. Even when I officially converted to Hellenism in 2009, Christianity still bled over into my life at times, because I had not yet started studying my new religion. All I knew was that I believed in the Greek Gods. It actually took a little while before I realized how to begin my new course in life.

When it comes to the bible, I can see how some people may interpret certain things as being magical or spell-worthy, such as the battles between Moses and the Pharaoh's magicians, the chanting of Psalms, or the prayers and stories that can be viewed through magical lenses, but I also think it's important to realize that the people who wrote it probably didn't see it that way. If we're honest with ourselves, the bible is a giant protest against Witches and Pagans, and stands against everything we hold dear, such as freedom of the mind and body, a religious reverence for Nature, and a love for the original Gods of mankind. I suppose it would all depend on the kind of Christianity you want to mix with Witchcraft, but I don't really think the bible itself is compatible. You'd have to ignore a great number of things in it.

But at the end of the day, religious freedom means any religion. If someone wants to be a Christian Witch, however they bring it together, its their own business. It's not hurting anyone, so if it makes them happy, so be it. As Witches and Pagans, we shouldn't be resenting, attacking, or shunning people for their personal religious and spiritual choices. That's not who we are, that's what we broke away from. Back in the day, I got a lot of flack from people, so I know how it feels to be thrown into a limbo where no one accepts you, and it's not fun. We would certainly find the Christian Witches far more likable than the Evangelicals in any case. So I say let people do their own thing in life. We don't have to always agree, but instead of tearing each other down, let's live in peace together.