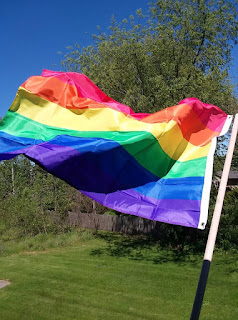 In support of the Equality Act of 2019, I've been flying the Rainbow flag off my balcony. In fact, it's the newest addition to my flag collection, as many know that I'm a fanatic collector. The rainbow flag is important to me for many reasons, one being that I think it's a very important time to support our fellow citizens in the LGBT community, as they are living under a presidential government that is very hostile to their right to life, liberty and the pursuit of happiness.

For many people, the rainbow flag is simply the symbol of the lesbian, gay, bisexual and transgender community and the rights they fight for. In recent times, the Q has also been added onto LGBT to represent queer, a word which simply means "different" in the dictionary. Being born in the rural south in 1984, I was taught to view the LGBTQ community almost like people from another planet during my upbringing, but the more you become educated and integrate yourself into society, the more you realize that everyone is a human being. We're all the same, just with different beliefs, lifestyles and attractions. Thankfully, being LGBTQ has become more normalized in our present day.

But I think the flag is even broader than simply LGBTQ itself. It really also symbolizes freedom from oppression and tyrannical government. It stands for your personal right to be yourself. It flies for the freedom of each person to live the life they want happily and successfully. It represents the inherent human rights of every single person. It also symbolizes diversity, the fact that the strength of a nation and a people depends on its ability to be plural and open minded. That which cannot evolve and live with the rest of the world, will die. This as well encompasses the realization that we are all human beings. The things which too often divide us are insignificant and shouldn't be allowed to persist. The flag helps us understand that our enemy is not each other.

In my view, you therefore don't have to be a member of the LGBTQ community to have the flag at your side. You just have to be someone who loves and values freedom, equality, peace, and humanity. The flag has been raised as a worldwide symbol, not only because there are LGBTQ people everywhere, but because of the values that it represents, which are the values that we all hold dear no matter who we are.