The Ancient Greeks Had Holy Wars, But For Different Reasons (1) 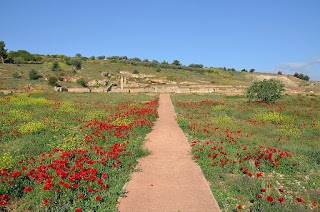 For a long time I've been wanting to write about the Sacred Wars of Delphi and what they mean to our Western world even today. In recent years, it's been a subject that has fascinated me. We think of Holy Wars as modern inventions of radical and extremist Christians and Muslims. The ancient Greeks fought them too at times, but the interesting part is that they were for far different reasons. They were not waged to eliminate another belief system, or to force another culture to adopt Greek religion.

Largely, there were four conflicts that took place over Delphi (the center of the ancient Greek world and seat of Apollon's renowned Oracle). The First Sacred War unfolded from 595 to 585 BCE, between the League of Delphi, consisting of religious tribes that included Athens, Thessaly and Sikyon, and the town of Kirrha (the League being allies against Kirrha). Kirrha was the harbor of Delphi, which meant that it held considerable influence over who and what came and went from the Temple Of Apollon and the Oracle therein. One must keep in mind that the Oracle of Delphi was not only vitally important to her locality, but all of the Greek world who went to her for counsel.

Tensions began to mount when Kirrha basically turned into a region of bandits and extortionists. Not only were people who were going to see the Oracle being attacked and robbed, but the town itself began charging astronomical tolls for those coming through their harbor to consult the Oracle or pay homage to Delphi (this likely also resulted in the theft of valuable gifts being brought for dedication to the sanctuary). Not only were they taking money and resources from Delphi, but also property that rightfully belonged to the God. The last straw probably came when Kirrha started to raid parts of Delphi directly.

The tribes who would form the League of Delphi decided they would unite in Delphi's defense. Along with Athens, Thessaly and Sikyon, the League likely included soldiers from many other parts of Greece that shared in Delphi's sphere of influence, including troops from Delphi herself. The War lasted for ten years. On advice from the Oracle, the League launched merciless and relentless war on the town. But what brought the conflict to an end was the first recorded use of chemical warfare. The League put hellebore into the water supply of Kirrha. It was an herb that simply gave everyone really bad diarrhea to the point that they could not fight. The League was victorious in the end. The result was the complete destruction of the town and the confiscation of its land by Delphi. Said land was left uncultivated and dedicated to Pythian Apollon, His sister Artemis, their mother Leto, and Athena Pronaia. The confiscation was also probably done to make sure the town could not reemerge. It's lack of virtue and justice meant that it had forfeited its right to exist in the eyes of its fellow Greeks.

The remaining people of Kirrha who managed to escape, went to Mount Kirphe, which is the southern part of Mount Parnassos that overlooks Delphi. The Games of Delphi, or Pythian Games, were born after this, to celebrate the victory, and members of the League would remain as protectors of Delphi.

The First Sacred War was fought in support of religious freedom, not against like modern Holy Wars. Delphi and the League had no interest in the beliefs of Kirrha nor her lifestyles. The League simply wanted Delphi to remain free, open and possess its property, and for everyone to have the safe right to go there for their pilgrimages. I think the War is a reminder to us in the West still today that freedom is not free and that it can be easily impeded if we don't protect it, especially from those who have the money and power to extort it. This factor plays out in our own American government where lawmakers are constantly bribed for their votes, and influential powers that can effect our country if they have a corner on something. However, if enough people simply stand for what's right and use their united powers (through things like voting and community organizing), they cannot be drowned out by the unjust.

Book: Scott, Michael, Delphi, A History of the Center of the Ancient World, Princeton Publishing, 2014.