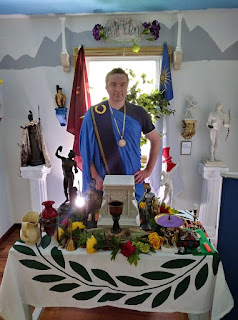 Chris Aldridge is an ancient Greek priest, theologian and mythologist who began his clerical career when he founded his own temple in High Point, North Carolina, dedicated to the worship of the Greek Gods, on July 8th, 2010. The name he gave the organization was Temple Of The Greek Gods, which it still retains to this day. In 2011, the state of North Carolina granted the temple legal religious incorporation along with all others in their jurisdiction, officially making him the Head Clergy or Head Priest. He still operates the organization to this day under that title. When he moved the temple to his hometown in 2011, Chris became the founder and operator of the only known, openly Polytheistic temple to ever exist in Thomasville's history, complete with its own physical worship quarters and sanctuary grounds.

The spring of 2011 was the first time Chris led a public rite as a priest of the Greek Gods, called the Gaia and Dionysos Earth Day festival, held in Jamestown Park. Chris solely designed the temple's official flag that year, and continued to hold consistent public rites in the Davidson County area for the local Pagan and Hellenic population. These included summer solstice and autumn equinox festivals dedicated to Apollo and Demeter, the Rite of Haides that celebrates Fall, and also a Memorial Day vigil for fallen Pagan soldiers of the United States that was held in 2012 in Thomasville.

In 2011, as a priest, Chris began his religious publications, opening his first public blog and self-publishing his first book on modern ancient Greek religious practice, centered around the concept of Neo-Pagan Hellenic Polytheism in 2012, which was more of Chris' worldview at that time. In September of that year, he held his first religious book signing at the popular Universal store in Greensboro, North Carolina called Eclectic By Nature.

In November 2012, Chris, his wife and son decided to move to her hometown of Freeport, Illinois. The temple's central operations came with them, of course. In 2013, the temple was granted legal incorporation into the state of Illinois, and the annual Gaia and Dionysos Earth Day festival was once again held in the renowned Krape Park and led by Chris in the spring of that year. Some local Pagans, who became friends of Chris, opened a Pagan supply store in the City that year as well called Mystic Hollow, where Chris spent a brief time teaching Hellenic classes. Mystic Hollow was not a primary outlet for him, however, and the store soon fell into decline and closed its doors. Chris served the Freeport and Stephenson County Hellenic and Pagan community until he and his family moved to Galena in the early spring of 2014, where Chris pursued an additional career as an historian at the City museum.

During his months living in Galena, Chris became involved in the Universalist Church of Stockton, Illinois, where he was given the ability to place public temple events on a far larger community platform. That October, he led a public Festival of the Dead celebration at the church that he and his wife had developed back in North Carolina called the Rite of Haides, a worship and celebration time that honors the Underworld Gods, Autumn, and invokes the spirits of passed friends and family members of those in attendance. In 2015, as he became more of a traditional and Reconstructionist Hellenist, his temple held Panathenaia for the first time at the Universalist Church there, resulting in one of the most diverse turnouts in any of the public rites he had led. Chris released his first prayer book that year called New Prayers of Old Hellas.

By this time, Chris and his family had left Galena and moved to the small town of Elizabeth, where his wife opened her own Pagan supply shop called The Gryphon's Nest, named after their son, and that she still runs online to this day. Leading public rites fell on the back burner for Chris for the next couple of years, as he focused primarily on writing books and growing his spirituality by building an outside sanctuary to Artemis in the hilly and forested region in which he then lived. The next book he produced was dedicated to the history, study and religion centered around his Patron Hero, Theseus. The book was called Theseus: His Life, Mysteries and Virtues. First publicized in 2016, the Freeport Public Library allowed him to host a book signing that summer, in which the Mayor of the City at the time, Jim Gitz, stopped by after hearing the promotion of the event on the radio. Chris gladly signed a copy for the City leader, and was delighted to live in a place with so much acceptance of diversity and religious freedom. Chris went on that July to speak at a public fireworks event in Freeport about his book and Theseus as the Founder of Western democracy. He also accepted assignments from his friends during 2016-2018 for banishments, and made a small name for himself for his ability to successfully cleanse homes of negative energies and spirits. 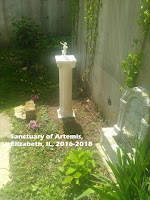 Chris built and maintained the Sanctuary of Artemis of Elizabeth, Illinois for two and a half years, during which time he produced more religious literature, including Light of Olympos: Ancient Greek Rites and Prayers for Everyday Life, In The Presence of the Gods: An American Odyssey, Hellenic Polytheism: A Personal Guide for Ancient Greek Practitioners, and Lives and Prayers of the Greek Heroes and Heroines. Shortly before he and his family moved out of Elizabeth, the renowned Pagan publication called Witches & Pagans Magazine, published a story about his former Elizabethan sanctuary, in their issue 36, and in the spring of 2018, Chris gave an interview to the Galena Gazette about his religious life and all he had done and experienced in the area before leaving for South Beloit, Illinois, where their family lived and held public rites again for a year.

In late August of 2019, Chris and his wife advanced the temple and their own careers greatly when they purchased a private residence and land in Machesney Park, Illinois to be used for temple functions and service its members and community. In the distant past, they had their own private residence for the same purpose, but it was much smaller and rented, never owned. However, the property in Machesney Park was and is entirely the sole property of Chris, the Priest, and his wife, the Priestess of the temple, forever. It completely changed the face and operation of the temple in that there would no longer be a need to go to public parks or other establishments for rites and gatherings. The temple now has a large, open sanctuary ground, and a physical indoor temple for its worshipers and friends. 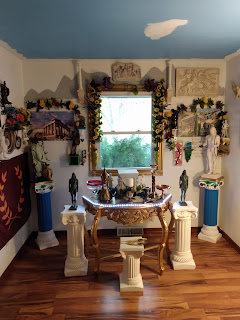 Chris continues to run his temple, lead public rites, publish blogs and other writings, and engage in public speakings and events. He has been a Hellenic worshiper and clergy for a decade.


"Polytheism with its rich sense of reality offers the individual possibilities for self-realization without allowing him to leave the common ground of what is considered human."
- Walter Burkert, Greek Religion.