We Can Sometimes See Where The Gods Threw Monsters 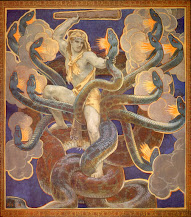 As a philosopher and a Greek mythologist, I do a lot of thinking about the latter with the maps of the former. One area that has always interested me is seeing how the tales of old still prove true today.

The Greek myths and Greek stories often require more than just a surface analysis. Most modern scholars, historians and even mythologists have yet to realize this. I think that some of the things the Gods did, were things that they kept doing as time went on, a progressive action like evolution itself. It wasn't a one and done kind of thing. Just as order has remained a constant, so have the actions of the Gods to maintain that order, balance and preferred universe. One of the most well known among these actions was the banishment of rebellious Titans and monsters, often imprisoned in the depths of the Earth away from humanity and the light above. In their prisons, they are kept from bringing harm, chaos and disorder to the surface of civilization and the world itself. That which was an affront to the Gods, or abhorred, was locked away. In the event that the monsters were still able to remain a threat to humanity, such as with the Minotaur, the Gods sent Heroes to kill them, such as Theseus.

The more we learn about the science of remote places far in the depths or the corners of the Earth, the more we see monstrous creatures even to this day. Let's take a dive into the ocean for instance. At one thousand meters, light can no longer reach the water, which means there is nothing but absolute darkness from this point onward. This depth also means that humans could not reach it in their natural form, nor could anything at this level or onward reach humans or general life above. By the time two thousand to four thousand meters is reached, which is double and quadruple the depth of when the light ceases, we start to see the monsters of the water, such as the angler fish, dragon fish, viper fish, fang tooth fish, and the giant squid - hideous and deadly creatures kept from the sight and reaches of the world above. And these are just the monsters we know of. Only 5% of the ocean has been explored and mapped.

All over the world, there are still places humans have not been, deep in caves or miles beneath the surface of the crust. What else has been put away in the bowels of the Earth or the universe itself, and for what reasons? All round us, each and every day, we still live with the ancient Greek stories and beliefs. They are not bound to an ancient past which is alien to us. They still form the realities of our world.