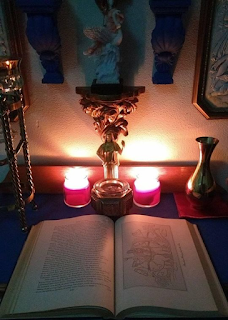 If your Pagan or Polytheistic religion has religious texts, you may find, like myself, that you enjoy a morning rite accompanied by Bibliomancy. It's not just a Pagan tradition, either. Christians do it all the time. I remember when I was southern baptist, my grandmother Faye told me that when I needed to know something for my spiritual, religious and personal growth, that God would guide to the right passage in the bible. Of course, these days, my texts are things like The Iliad, The Odyssey, and various philosophers like Plato.

In short, Bibliomancy involves the practice of finding selected words or passages in a book for answers to a question, normally guided by the hand of a God or another kind of spiritual presence.

The reason I enjoy Bibliomancy probably better than any other form of personal divination, is because of how detailed the message can be when it speaks to you. Instead of producing a card with brief epithets or a stone with a very general marking, you can actually have an entire response a page or more long.

Like today, as I celebrated the monthly observance of Athena's birthday, I used an antique copy of The Iliad in asking Her, basically, "What message might you have for me today, O' Goddess?" I was guided to page 455, which said,

"Cease from the strife! Let godlike Achilles drive from the city right now the Trojans; for what care I for contention and succor? Do not mistreat the Immortals for a mortals' sake. Thus the rage of Xanthus was tamed, but by the dissension of the Gods, the broad earth groaned."

Really, the entire page talked about me allowing myself to have peace in life, to blame mortals for mortal problems and not the Gods, and that the Gods, if angry at anything, are more so upset with the state of the world, not me personally. It was clearly a message for a man who is being too hard on himself as an individual, and to call on the Gods and Heroes to help fight the things that are overwhelming to me. And lastly, that if I am trying to impress the Gods with my own feats, it may be of little consequence to Beings who are far bigger than myself. In other words, once again, don't be so hard on myself.

The advice of the Goddess was a tremendous blessing. I needed it today more than ever, for Her to say those words. She clearly knew my suffering with the hardships of my life, and the ones I have put on my own mind and body. She came in mercy to assure me of the love of Heaven, and this is one of the main reasons I like Bibliomancy. Through the text, She was able to speak to me with direction and precision, because there were many ways that those words could be utilized.