Eminem Takes A Knee Because Americans Can 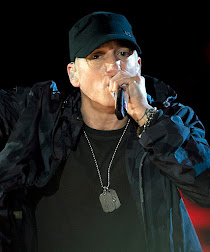 I often think that people are too concerned about the wrong things in America. As everyone knows, Eminem took a knee during his Superbowl performance this year, mirroring common protests that have been taking place since Colin Kaepernick, and republicans like Rudy Giuliani wasted no time in telling Eminem to leave the country. My initial thought was that we have too many people worrying about someone kneeling at a ballgame instead of things like poverty, wages, healthcare, education and jobs. Should we not be focusing on the issues? Or perhaps there are pundits and politicians who want to direct our attention away from America's problems because those people either created them, or have no solution.

I love America. I always have loved my country, and I will always serve her. But are there things I don't like about America? Absolutely. I don't like the fact that Jeff Bezos continues to make millions and billions that he doesn't need while millions of Americans live in poverty. I am also disheartened by the fact that hate is still a problem. But it is not unamerican to change things for the better. Humans are not perfect, and thus neither are their nations, and so America is an idea, a working progress, that we always need to be building and repairing. Simple protest does not mean that someone hates America. I think of America like a well functioning car. When the engine light comes on or it starts acting funny, you repair it. Ignoring the problems and pretending they don't exist will eventually put you on the side of the road in a broken down state.

I wonder if Rudy would have told Lincoln or Martin Luther King to leave the country? They didn't like the injustices around them either. I think that these men, like Thomas Jefferson, realized that America is the world's best hope, and if that hope is to remain alive, America has to be the enemy of injustice, tyranny and evil, and never a place where those things can find aid and comfort. In conclusion, to Rudy I would say, Eminem is exercising his Constitutional rights. If you don't respect the Constitution, maybe you are the one who should leave.