Epithets are a paradox in Greek religion at times. Some ancients considered them to all be different Gods entirely, while most of us today think of them as different manifestations of the same God. For instance, we today would think that Athena Polias and Athena Nike is Athena Herself in two manifestations, while ancients might have considered Athena Polias and Athena Nike to be individual Gods in their own selves (although I am sure there were also ancients who saw them as the same Deity).

I myself have always considered the Epithets to obviously be different manifestations and functions of the God that they come from. For one, it just doesn't make any sense to think that there are 50 different Zeus's. How would that even work? If there were indeed 50 different Gods fulfilling similar functions to Zeus, it would make more sense to give them their own personal names or a name that means "like Zeus," instead of Zeus Himself. And secondly, the very definition of an Epithet is that it's an aspect of your whole. It's not something that separates itself from you and becomes its own person. In fact, without your whole self, there wouldn't even be an Epithet in the first place. So in my view, all of the Epithets of Athena, or any God, is the one God manifesting into the different areas over which they have dominion. They're all the same God doing different things, and rest assured, they're the best at what they do.

This doesn't take me away from being a Hard Polytheist either. I believe there are many Gods in their own independent forms, such as the 12 Olympians. I just believe that each one is their only one. I don't think there's 100 different Athenas, I think there's one Athena and She can manifest into whatever She wants, because the Gods permeate Nature however they choose. 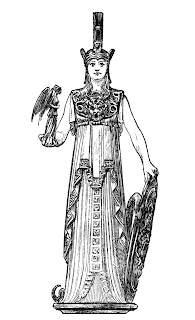 In my own home, I do have shrines to the same Deity but as different manifestations. Alongside my shrine of Apollon next to my library, I have a shrine to Athena in Her Epithet that I call PanAthena, or All Athena, in the sense that it honors everything that She is. But at the end of my hallway, I also have a wall shrine to Athena Parthenos, to honor Athena as the Virgin, the Goddess of Athens, and the Goddess of the Parthenon that gave birth to Western civilization, which is the civilization in which my family and I live and are from. The shrine is also a tribute to the memory of the original Athena Parthenos statue that once stood in the original Parthenon itself. It has since been lost, presumably forever. If I had to take a guess, I would say it was probably either destroyed during the times of Pagan persecution, or it was broken down for its gold and ivory and made into other things by the Common Era Greek State. But the point is that, even with my two different shrines of Athena, I do not consider them to honor two completely different Goddesses. They stand for the same Goddess in many different forms.

I think the Gods use their many Epithets, in part, to better connect with mortals and Earth. We have so many different things that go on in our lives and world, and for Gods who love to take part in the affairs of mortals and the Natural World, they reveal themselves to us in all the ways that we can understand them.